The Cricket Captains' Walk is a collection of specially commissioned bronze busts of Test captains of the Australian men’s national cricket team, arrayed on pedestals on either side of a looping path set in a large public park in Cootamundra, New South Wales. The all-weather path, which starts and ends at Wallendoon Street is family, jogger, and wheelchair friendly, and approximately 250 metres long. 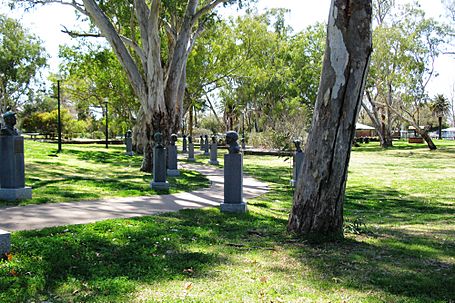 The Walk was planned and executed by the Cootamundra Shire Council (now Cootamundra–Gundagai Regional Council) with the approval of the Australian Cricket Board (now Cricket Australia).

The nearby statue by Valerius (shown below) of Bradman in action was unveiled during the celebrations for "Sir Don"'s 92nd Birthday in August 2000. A minor mystery surrounds the Brian Booth sculpture, similar in style to others by Valerius, but not credited in the official documentation. There is no obvious clue in the plaques, which have been commendably uniform in style and execution over 30 years.

All content from Kiddle encyclopedia articles (including the article images and facts) can be freely used under Attribution-ShareAlike license, unless stated otherwise. Cite this article:
Cricket Captains' Walk Facts for Kids. Kiddle Encyclopedia.