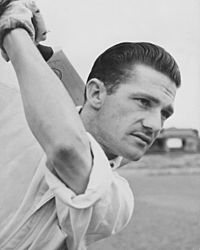 Robert Neil Harvey OAM MBE (born 8 October 1928) is an Australian former cricketer. He played for the Australian cricket team between 1948 and 1963. He played in 79 Test matches for his country. He was the vice-captain of the team from 1957 until his retirement. He was a left-handed batsman, a fielder and sometimes an off-spin bowler. Harvey was the youngest member of the 1948 Invincibles of Don Bradman to tour England. This squad is regarded as one of the finest teams in history. He was the senior batsman in the Australian team for much of the 1950s. Harvey has been was named by Wisden Cricketers' Almanack as the finest fielder of his era.

Harvey was born in Fitzroy, a suburb of Melbourne, Victoria. He is one of six cricketing brothers. Neil and brothers Merv, Mick and Ray would go on to play for Victoria. During the 1949–50 tour of South Africa, Harvey met Iris Greenish. The couple later married and had three children.

All content from Kiddle encyclopedia articles (including the article images and facts) can be freely used under Attribution-ShareAlike license, unless stated otherwise. Cite this article:
Neil Harvey Facts for Kids. Kiddle Encyclopedia.