Kimberley John Hughes (born 26 January 1954) is a former cricketer who played for Western Australia, Natal and Australia. He captained Australia in 28 Tests between 1979 and 1984 before captaining a "rebel" Australian team in a tour of South Africa, which country at the time was subject to a sporting boycott.

A right-handed batsman, he was identified as a potential Test cricketer from an early age, but his impetuous style of batting, and personality clashes with influential teammates and opponents such as Dennis Lillee and Rod Marsh, saw a later introduction to first-class and Test cricket than anticipated.

Hughes' captaincy record with Australia was hindered by a succession of matches being played away from home and the necessity to rebuild an inexperienced team after the frequent absence, and later the retirement, of several senior players. Placed under extreme pressure by the media and former teammates during a series of losses to the then dominant cricket team in the world, West Indies, Hughes resigned from the captaincy, making an emotional and tearful speech. He finished his career playing cricket in South Africa.

Hughes was born at Margaret River, Western Australia. The Hughes family lived in nearby Kudardup and later settled in the Geraldton suburb of Wonthella and Hughes attended the local Allendale Primary School, where his father was the headmaster.

In Geraldton, the young Hughes played a variety of sports, including hockey, tennis and especially Australian rules football. His boyhood hero was Austin Robertson, Jr. who played for Subiaco Football Club, the club that Hughes' father had played for as a young man.

His first organised cricket was as an 11-year old, filling in for the Bluff Point Cricket Club under-16 side. Aged 11, he was selected for a Geraldton under-16 representative side to compete in the junior "Country Week" tournament in the state capital of Perth. He was selected in the Geraldton Country Week team again the following year. It was at this tournament that Hughes' performances playing against much older boys saw him come to the attention of cricket administrators.

After Hughes finished primary school, the family moved to Perth. Hughes attended City Beach High School and played cricket for the Floreat Park Under-16 side. He was included in the Western Australia Colts squad. The next season, aged 15, Hughes made his first grade debut for Subiaco-Floreat Cricket Club, captained by former Test player Des Hoare.

In January 1970, Hughes was selected to play for Western Australia in the national under-19 carnival. His captain, Ric Charlesworth, later described Hughes as the most gifted junior cricketer he had ever seen. Later that season Hughes made his first century in first grade cricket, against Midland-Guildford; he finished the season topping the club batting averages. 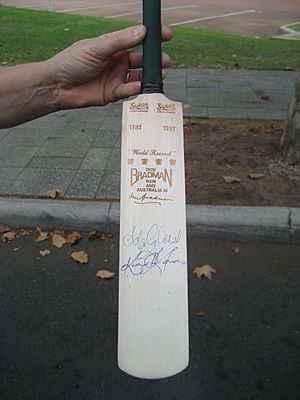 After only nine first grade games, in 1970–71 Hughes was included in the Western Australian Sheffield Shield squad. Described at the time by Test wicket-keeper Rod Marsh as a technically perfect batsman. It would be four years after his maiden first grade century that Hughes would make his second, against North Perth.

Playing for Western Australia against the touring Pakistan team in December 1976, Hughes made 137 runs from only 167 balls, making a claim to the attention of the national selectors. A few weeks later, Hughes was called up as twelfth man for Australia in the New Year's Test match at the Melbourne Cricket Ground (MCG). Hughes was included in the Australian team to tour New Zealand.

After finishing high school, Hughes attended Graylands Teachers College to train as a primary school teacher. His first job as a teacher was at Linden Park Primary School in Linden Park during his attempt to make the South Australian team in 1974. After teaching, he found employment in the finance industry.

Hughes was a skilled Australian rules footballer as a junior and was invited to play with the Claremont Football Club in the West Australian National Football League. He played two seasons at Claremont—1973 and 1974.

Hughes was aged 14 when he met Jenny Davidson, a fellow student at City Beach High School. The pair married in March 1977 and within four weeks Hughes left for a four-month tour of England. In January 1981, Jenny gave birth to twins. Another son and a daughter followed. Kim's brother Glenn played first-class cricket for Orange Free State and Tasmania.

After his playing career, Hughes for a time acted as the chairman of selectors for the Western Australian Cricket Association, and is an occasional commentator for ABC Radio's cricket coverage. He was Head of Cricket at Hale School, in Wembley Downs, Perth.

There is a dining room at the WACA Ground named the Kim Hughes Room in his honor. Hughes's nickname was "Claggy", a reference to the Clag glue found in classrooms across Australia.

All content from Kiddle encyclopedia articles (including the article images and facts) can be freely used under Attribution-ShareAlike license, unless stated otherwise. Cite this article:
Kim Hughes Facts for Kids. Kiddle Encyclopedia.