Founded by Bishop Mathew Blagden Hale in 1858, Hale School is the oldest private boys' school in Western Australia. The school was originally situated at the Cloisters on St Georges Terrace in Perth, relocating in 1914 to West Perth, and in 1961 to its current premises in Wembley Downs. The campus now consists of a junior school for Years 1 to 6, a middle school for Years 7 & 8 and a senior school for Year 9 to 12. The school also consists of sporting grounds, and boarding facilities for regional and international students.

The school is a member of the Public Schools Association and the Junior School Heads Association of Australia.

An intrinsic part of Australia's colonial history, Hale School was the first high school in Western Australia, and the school educated many prominent sons of the Swan River Colony. Modelled on England's prestigious public schools, it has sometimes been accused of being elitist. For example, in his biography of Sir John Forrest, Frank Crowley described the school's values throughout the 1870s as "a heady compound of social snobbery, laissez-faire capitalism, sentimental royalism, patriotic Anglicanism, benevolent imperialism and racial superiority".

In contemporary social commentary, for example Professor Mark Peel's study of class and schooling in Australia, Hale School was identified as one of the most rigorous and selective schools for boys. In recent times equity concerns have been addressed by a scholarship program, including the first full boarding scholarships in Western Australia for indigenous students.

The school was initially known as "Bishop Hale's Collegiate School", and later as "The High School". It has since been renamed "Hale School" in honour of its founder, and reconstituted under the Hale School Act (1876) of the Parliament of Western Australia.

Bishop Hale's Collegiate School was designed by Richard Roach Jewell in 1858 and is situated on St Georges Terrace. The buildings eventually became known as The Cloisters. In 1914, the School moved to a more spacious site at Havelock Street, West Perth, opposite the Parliament of Western Australia. Finally, in 1961, the school relocated to its current 480 000 m² premises in Wembley Downs.

General classrooms ('A-block' & 'B-block'), science laboratories and classrooms ('S-block') and mathematics classrooms ('N-block', currently being refurbished, and soon to be commerce classrooms) are all located opposite the main sports oval - Craig Oval, which sits in the centre of the campus. The now defunct 'L-block' is also located in this area as it was the former location of the English department, until they moved to the new 'F-block'. The refurbishment of this building began in October 2009, to integrate it with the new Middle School being built nearby. The new classroom building ('F-block') located in the new Teaching and Learning precinct houses the English, History and Languages departments

The Peter Wright Technology Building, which houses the Design and Technology Workshop as well as Computer and Design Suites sits adjacent to the Doug Poake Pool. Also adjacent to the swimming pool is the art complex, gymnasium and change-rooms.

The new Teaching and Learning precinct on the site of the old boarding houses near the south entrance to the campus was officially opened on 1 July 2009. The main feature of this project, a new Library Resource Centre includes a dedicated Year 12 study area and Gifted and Talented and Curriculum Support rooms facing a central courtyard. Beneath the library is a new clothing store, IT department and Old Haleians' Boardroom.

While the library was open for student use from February 2009 school year, the official opening ceremony was not held until 1 July 2009, when it was officially opened by Andrew Forrest and unveiled as the Forrest Library. It honours members of the Forrest family, from Sir John Forrest to Alexander Forrest, and on to Andrew Forrest himself, who had been educated at Hale.

Also included in this precinct is a new cafeteria with internal and external seating opposite the library and a new Teaching and Learning building. The classroom block ('F-block') consists of 17 teaching spaces for History, English and languages, as well as two language oral work rooms and new office space for teaching staff. Another important feature is a set-down and pick-up road that runs from a new 50-bay carpark adjacent to the chapel, along the front of the classroom block, past the Library undercroft, before rejoining the main drive.

In 2010 the Australian Institute of Architects awarded the Forrest Library an Architecture Award for Public Architecture.

The centrepiece of the complex is the timber-lined recital auditorium which accommodates 353 patrons on stepped tiers with a flat performance area 17 m wide and 12 m deep. The auditorium design has been dictated by the requirements to have natural acoustics for music. This has been achieved through the use of a traditional ‘rectangular box’ design with a maximum ceiling height of 8 m. The auditorium can be tuned for different instruments and various music/drama performances to achieve desired acoustic qualities. This is accomplished by a system of moveable full-height wall reflectors, suspended ceiling reflectors and rotating wall panels with differing degrees of absorptive linings. The ceiling loft is mechanised with 27 variable speed automatic winch lines which give a great degree of flexibility for a range of shows.

The construction of a new Middle School facility commenced in January 2009 and was completed in January 2010. The Middle School site is located adjacent to Unwin Avenue, between the John Inverarity Music and Drama Centre and the Memorial Hall. The building contains 16 classrooms for Year 7 and 8 students. The Year 8 Classrooms are on the ground floor and the Year 7 Classrooms are on the first floor. The main entrance, reception & administration offices for the Head of Middle School, Deputy Head, Head of Curriculum & Head of Pastoral Care are located on a separate intermediate level, which is at street level with Unwin Avenue. Other staff facilities are located on the ground floor. In addition, the facility incorporates one of the School's existing buildings ('L-block' classrooms) which were refurbished as music, drama and science classrooms for the Middle School. The ground level of this building was refurbished as a Middle School Science Classroom (and store room), with the upper level refitted to house a Drama classroom, Music classroom (with store room) & 4 music practice rooms.

The refurbishment of this building commenced in October 2009 but was not completed in time for the commencement of the school year in February 2010. The new building replaced the 'C-block' classrooms and Senior School Library that previously occupied the site and were demolished in December 2008. 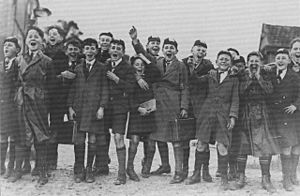 In 1885, the school entered a team into the West Australian Football Association (WAFA) for its inaugural season, but were forced to withdraw two rounds into the season due to a lack of players.

Hale School has hosted important teams over the years, including the English Rugby Team on occasions, namely for training during the 2003 Rugby World Cup. The school hosted the English Cricket Academy, including international cricketers Michael Vaughan, Owais Shah, Stuart Broad, Rikki Clarke and Jon Lewis for nets sessions and practice matches, as seen on the front page of The West Australian on 29 November 2006.

Hale also employs a number[quantify] of coaches to lead and assist with their co-curricular program.

Hale School's main publication is the school's official book, The Cygnet, which is released at the start of each year and includes about 250 pages of the previous year's major happenings, school photos and sports results. The school also publishes an alumni magazine, The Haleian, twice a year, usually around June and November. 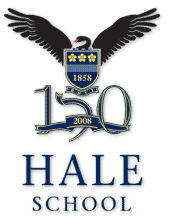 There are currently 10 houses in Hale Middle/Senior School. These include 8 day houses, and 2 boarding houses:

Loton was changed from a boarding house to a day house in 2005, following the completion of the new boarding house. Prior to this Loton's colour was brown. Year 8 (and some Year 7) boarders are housed in Brine House, which is located between the Junior School and the Music and Drama Centre, they are however also members of either Faulkner or Wilson houses.

There are also 4 houses in Hale Junior School:

Former students have served in all conflicts since the Boer War with many having distinguished military careers..

Corporal Ben Roberts-Smith, Hale Class of 1995, son of Major General Len Roberts-Smith, is currently Australia's most decorated soldier, having been awarded the Victoria Cross and Medal for Gallantry.

One hundred and twenty Old Halians have lost their lives in conflicts since the Boer War. A Memorial Grove at Wembley Downs honours these men with 120 plaques and a sculpture with an 'eternal flame' theme. The great hall of the School has also been named Memorial Hall. The Hale School Museum contains important military and civilian records relating to the School and the state of Western Australia. A small Museum display is also located at the Old Hale School, now the Constitutional Centre of Western Australia, on Havelock Street, West Perth.

An alumnus of Hale School is called an Old Haleian. Notable Old Haleians include:

All content from Kiddle encyclopedia articles (including the article images and facts) can be freely used under Attribution-ShareAlike license, unless stated otherwise. Cite this article:
Hale School Facts for Kids. Kiddle Encyclopedia.