Junee is a medium-sized town in the Riverina region of New South Wales, Australia. The town's prosperity and mixed services economy is based on a combination of agriculture, rail transport, light industry and government services, and in particular correctional services. In 2015 Junee's urban population was 4,762.

The Wiradjuri people are the traditional owners of the local area prior to European settlement. Leopold de Salis (1816-1898), pastoralist and later politician was one of the principal squatters to open up the Riverina region to agriculture. He established the 'Jewnee' pastoral run in the 1840s. A post office opened in 1862 and a village called 'Jewnee' was gazetted in 1863 on the wool road to Sydney. That same year, Ben Hall and his bushranging gang raided the village. 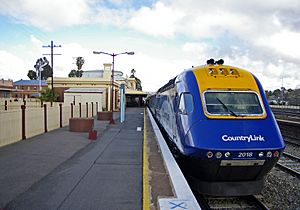 Junee railway station with a CountryLink XPT at the platform

In 1866 Junee's population was recorded as twelve but the discovery of reef and alluvial gold during the 1860s triggered a gold rush. The main sites – Old Junee (to the west), Junee Reefs (to the north) and Illabo (to the north-east) – were mined until the 1880s.

By the mid-1870s with the southward expansion of the Main South line in New South Wales, the main railway line between Sydney and Melbourne passed 8 kilometres (5.0 mi) east of the town. Junee Post Office was renamed Old Junee in 1881 when the town of Junee was relocated nearer to Junee Junction (Junee railway station). Junee Railway Station Post Office opened on 6 July 1878, was renamed Junee Junction in 1881 and later still, Junee in 1893.

Junee became one of the most important railway centres in the state after the construction there of railway repair facilities including the Junee Roundhouse. Local government was established in 1886 and a courthouse was built in 1890. The railway defined the character of Junee for almost 100 years and the renewed prosperity is evidenced by various hotels and railway facilities. Today these buildings are still faithfully maintained in accordance with architectural standards of their day.

In May 1901, the Duke and Duchess of York arrived in Junee as part of their tour of the British Empire.

The advent of rail transport provided the impetus for Junee's second economic boom providing local agricultural producers with very affordable direct access to both markets in Sydney and Melbourne. In 1952 the largest wheat terminal in the Southern Hemisphere was constructed at Junee.

The Main South line between Sydney and Melbourne runs through Junee, as does the Olympic Highway, named for the route of the 1956 Summer Olympics Torch Relay. 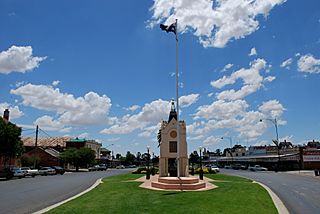 All content from Kiddle encyclopedia articles (including the article images and facts) can be freely used under Attribution-ShareAlike license, unless stated otherwise. Cite this article:
Junee Facts for Kids. Kiddle Encyclopedia.