Junee railway station is located on the Main South line in New South Wales, Australia. It serves the town of Junee. 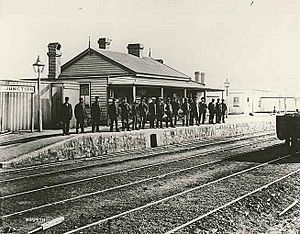 Junee station opened on 6 July 1878 when the Main South line was extended from Bethungra. It served as the terminus until the line was extended to Bomen on 3 September 1878. It was renamed Junee Junction on 28 February 1881 when the Hay line opened as far as Narrandera, before resuming its original name in April 1940. Later an island platform would be added.

Junee has long been an important railway town. In January 1947 a 42 road, fully covered roundhouse was completed. The Junee Locomotive Depot was the last steam locomotive depot built by the New South Wales Government Railways. In July 1993 the State Rail Authority closed the depot. It is currently leased to rolling stock repairer Junee Railway Workshop as well as housing the Junee Roundhouse Railway Museum.

On 23 December 1999, the footbridge and signal gantry at the north end of the station were demolished when it was struck by a container.

All content from Kiddle encyclopedia articles (including the article images and facts) can be freely used under Attribution-ShareAlike license, unless stated otherwise. Cite this article:
Junee railway station Facts for Kids. Kiddle Encyclopedia.