The Bomen railway station is a heritage-listed closed railway station located on the Main South line in Bomen in the City of Wagga Wagga local government area of New South Wales, Australia. The property was added to the New South Wales State Heritage Register on 2 April 1999. Passenger trains no longer stop at the station. 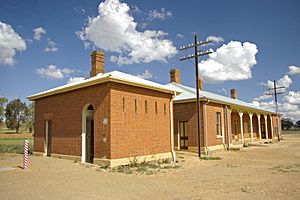 As at 24 November 2000, Bomen station group and residence was a rare one-off design station from the boom period of railway construction. Of particular importance is the continuous pitched roof extending over the platform and the recessed verandah on the street side. The verandah column details are also unusual. The intactness of the buildings is also of significance. The inclusion of the well is an unusual element in a station group. This station was the terminus of the southern line from September 1878 to September 1879 while the rail bridge over the Murrumbidgee River and flood plain was finished. They are focal buildings in the small township of Bomen and indicate the former significance of the site in the development of the railway system throughout the state.

The Bomen railway station was listed on the New South Wales State Heritage Register on 2 April 1999 having satisfied the following criteria.

All content from Kiddle encyclopedia articles (including the article images and facts) can be freely used under Attribution-ShareAlike license, unless stated otherwise. Cite this article:
Bomen railway station Facts for Kids. Kiddle Encyclopedia.