Narrandera ( nə-RAN-dər-ə) until around 1949 also spelled "Narandera", is a town located in the Riverina region of southern New South Wales, Australia. The town lies on the junction of the Newell and Sturt highways, adjacent to the Murrumbidgee River, and it is the gateway to the Murrumbidgee Irrigation Area. At the 2011 census, Narrandera had a population of 3,871 people. 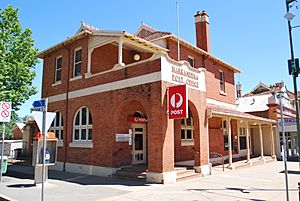 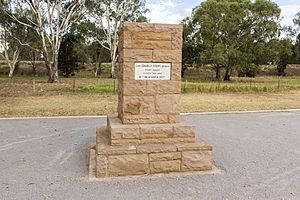 Narrandera is a river town with a rich heritage. Captain Charles Sturt is credited with being the first European to observe the area that later was to become known as Narrandera. However Sturt, who passed through the district on 12 December 1829, was not the first explorer to cast eyes on the Murrumbidgee River. The upper Murrumbidgee, the "Big Water", was first discovered in April 1821, by Charles Throsby. The name Narrandera is probably derived from Wiradjuri nharrang, meaning "frill-necked lizard".

Narrandera had its first recorded mention as a pastoral station or "run" (Narrandera Run) in 1848, at which time the property held by Mr Edward Flood comprised approximately 31,100 hectares (76,800 acres).

The Borough of Narrandera was constituted by proclamation dated 17 March 1885, and gazetted the following day. The centenary of Local Government in Narrandera was celebrated in 1985.

On 3 September 1945, a Royal Australian Air Force Bristol Beaufighter assigned to No. 92 Squadron crashed into the canal at the western end of the town during a joy flight, killing all seven people on board.

A celebratory weekend event to mark Narrandera's sesquicentenary, named Back to Narrandera 1863 to 2013, was held in early October 2013. The Governor of New South Wales, Marie Bashir AC CVO, who was born in Narrandera, opened the celebrations at a luncheon. During her speech of proclamation she acknowledged the indigenous custodians of the land, and noted that the name Narrandera is a Wiradjuri word for "the place of lizard or goanna." Bashir informed the luncheon guests that 150 years ago 'on this site on the Murrumbidgee River, the beautiful place was officially proclaimed as a town named Narrandera'. Included on the program of events and activities for the celebrations were the Parkside Cottage Museum was open for most of the weekend and displayed many historical artefacts, including archival resources about the P.S. Wagga Wagga; the Murrumbidgee Sheepdog Championships were held; there were Narrandera Cemeteries Heritage Walks; a cocktail party; and a Chinese exhibition. There was also a Railway Memorabilia Display with Vintage Train Rides and the John O'Brien Heritage House was opened to the public; there was a vintage film evening; a classic ball; a Back to the 60's Dance; the Lions Club held a recovery breakfast; and a Ye Olde Town Picnic followed; with other events, including a CWA Devonshire Tea; a farmers' market; and a time capsule was sealed and placed under the Narrandera Clock Tower. The new Rocky Waterholes Bridge was also opened.

The town of Narrandera is located adjacent to the Murrumbidgee River, at the intersection of the Newell Highway and the Sturt Highway at the centre of a diversely productive agricultural region. Its attractive tree-lined streets contrast with the open plains that surround it.

The Narrandera Memorial Gardens include the unusual Hankinson Fountain. Manufactured by the Royal Doulton Company of England, the ceramic fountain is one of only two known to be in existence, the other located in India. It was given to the people of Narrandera by Alderman and Mrs Hankinson in 1922 in honour of locals who served in World War I. The Hankinson Fountain was smashed by an act of vandalism in 1971 and was restored by Charles Pearce.

Narrandera now marks the transition between an extensive dry-land area devoted to cereal crops and sheep and wool production to the east, and, to the west, the Murrumbidgee Irrigation Area (MIA) fed by water from the Burrinjuck Dam. The MIA is a region where irrigation has opened the way to a diversity of enterprise, from the growing of rice and other cereals under irrigation to the production of citrus, wine grapes, potatoes, and increasingly, cotton.

The town also has number of historic attractions, such as the Royal Doulton Fountain, located in the Memorial Gardens; a fig tree on the corner of King and Cadell Streets, which is thought to be 150 years old; and the Mon Repos, a residence built in a Queen Anne-style, which was built in the 1890s.

Narrandera's immediate surrounds feature a number of waterways, the major waterway being the Murrumbidgee River.

The Irrigation Canal, which carries water to the Murrumbidgee Irrigation Area to Narrandera's west, flows through the town. It originates 34 kilometres (21 mi) east at Berembed Weir where water is diverted from the Murrumbidgee River. The canal follows the natural bed of Bundidgerry Creek and in places spreads wide and has no levee banks. Lake Talbot was formed in 1924 when the bank of the Irrigation Canal gave way, flooding the river flat between the canal and Bundidgerry Hill. The shallow body of water was allowed to remain and became an important recreational feature of the town. The eastern end of the lake is commonly used by water skiers while the western end forms a wetland habitat for native fauna. A wetland has been created off Lizard Drive, only 300 metres (980 ft) from the Murrumbidgee River. The Narrandera Wetland is a collection point for storm water run-off from the town.

Like many rural localities in the area, the population level has progressively declined over a number of years, evidenced as follows:

Narrandera is well served for transport. The Sturt Highway and the Newell Highways cross just south of Narrandera. Greyhound Australia service Narrandera, which is listed as Jillenbah, daily. The Narrandera Airport is 5 kilometres (3.1 mi) west of the town, and is serviced by Regional Express (REX), operating return services daily to Sydney, approximately 1 hour and 20 minutes' flying time away.

Narrandera is a served by weekly NSW TrainLink Xplorer service operating between Sydney and Griffith. NSW TrainLink also operate a road coach service from Wagga Wagga to Griffith via Coolamon.

The novel Jessica, by Bryce Courtenay, mentions Narrandera several times as the main town near the place where the book is set.

All content from Kiddle encyclopedia articles (including the article images and facts) can be freely used under Attribution-ShareAlike license, unless stated otherwise. Cite this article:
Narrandera Facts for Kids. Kiddle Encyclopedia.