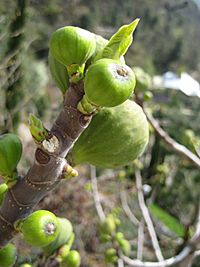 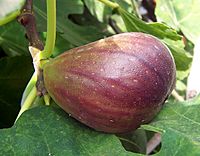 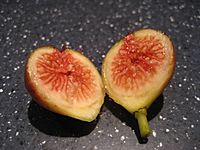 Many figs are grown for their fruit, though only the common fig is grown to any amount for eating.

Some 'virgin fruit' farms of common figs do not require pollination at all, and will produce a crop of seedless edible figs without fig wasps. This section explains how this is done.

The common fig (Ficus carica) is a gynodioecious plant, which means its fruits are either hermaphrodite and "inedible figs" or caprifigs. In traditional culture in the Mediterranean region they were considered food for goats (Capra aegagrus): 'caprifig' means 'goat fig'. In the female fig trees, the male flower parts fail to develop; they produce the "edible figs".

Fig wasps grow in caprifigs but not in the female syconiums. The female flower is too long for the wasp to successfully lay her eggs in them. Nonetheless, the wasp pollinates the flower with pollen from the caprifig it grew up in. When the wasp dies, it is broken down by enzymes inside the fig. This means you do not eat the wasp because it has been dissolved. The wasp does not transmit any diseases harmful to humans.

The edible fig is one of the first plants that were cultivated by humans.