The Frill-necked lizard (Chlamydosaurus kingii) has a large reptile, thin frill around its head, which it displays in order to frighten enemies. To appear even more impressive, it also opens its mouth wide and often rears up on its hind legs. When frightened, this lizard will run away, using its back-legs only, earning it the nickname, the "bicycle lizard."

In the Jawoyn language of the Katherine area, it is known as leliyn. 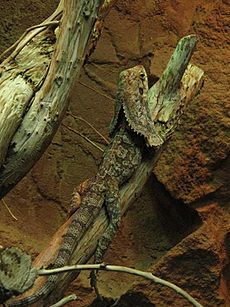 A frill-necked lizard in a reptile display

The frill-necked lizard is a relatively large member of the agamid family, growing up to 85 cm (2.79 ft). It is capable of bipedal locomotion and has been described as regularly moving in this manner with a purposeful stride at times by naturalists.

Colouration tends to be brown or grey with spots and blotches of darker colours mixed in a mottled fashion to give the appearance of tree bark. There is not one standard colour: rather, colouration varies according to the lizard's environment. For example, a lizard found in a dryer, clay filled environment will most likely have a collage of oranges, reds, and browns; whereas a lizard found in a damper, more tropical region will tend to show darker browns and greys. This suggests they are adapted to their habitats; their colours are a form of camouflage.

The most distinct feature of these lizards is the large ruff of skin which usually lies folded back against its head and neck. The neck frill is supported by long spines of cartilage which are connected to the jaw bones. When the lizard is frightened, it produces a startling deimatic display: it gapes its mouth, exposing a bright pink or yellow lining; it spreads out its frill, displaying bright orange and red scales; raises its body; and sometimes holds its tail above its body. This reaction is used for territorial displays, to discourage predators, and during courtship. The red and orange parts of its frill contain carotenoid pigments.

The bones of the frill are modified elongate hyoid types that form rods which expand the frill. Secondarily the frill can serve as a form of camouflage when relaxed; there is no standard colouration to the body, but it is usually darker than the frill. 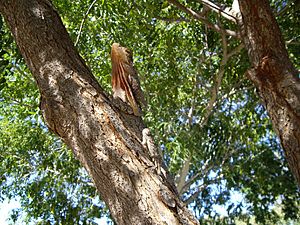 It tends to be an arboreal lizard, meaning it spends a majority of its time in the trees. The lizard ventures to the floor only in search of food, or to engage in territorial conflicts. The arboreal habitat may be a product of the lizard's diet, which consists mainly of small arthropods and vertebrates (usually smaller lizards). However, the trees are most importantly used for camouflage. 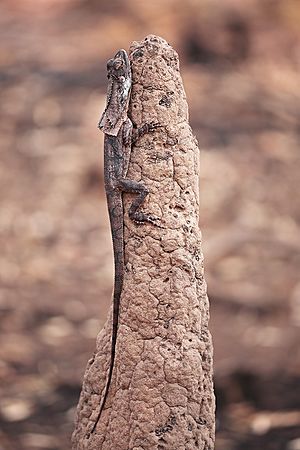 Cryptic pose on termite mound in the Northern Territory

Like many lizards, frill-necked lizards are carnivores, feeding on cicadas, beetles, termites, and mice. They especially favour butterflies, moths and their larvae. Though insects are their primary source of food, they also consume spiders and occasionally other lizards. Like most members of the agamids (dragons), frill-necked lizards employ an ambush method of hunting, lying in wait for their prey. When the lizards eat, they eat in abundance; these binge periods usually occur during the wet season, when they ingest hundreds to thousands of alate (flying) ants or termites.

The frilled-neck lizard is ectothermic and maintains its body temperature by basking briefly to achieve an average of 2–3 °C above the surrounding temperature. Weather conditions, including sunlight, are the main factors regulating the lizards’ temperature. This basking period usually occurs in the morning to early afternoon to ensure maximum exposure to sunlight. However, the lizard's final internal temperature depends mainly on the ambient temperature of the surrounding environment. The lizard's frill was once thought to aid in thermoregulation, but this has been found without merit.

A frill-necked lizard was featured on the reverse of the Australian 2-cent coin until 1991.

A frill-necked lizard named "Lizzie" was the mascot for the 2000 Summer Paralympic Games.

The lizard features on the emblem of the Northern Australian regiment NORFORCE.

Because of its unique appearance and behavior, the creature has often been used in film and television. A frill-necked lizard named "Frank" appeared in the 1990 Disney animated film The Rescuers Down Under. In the 1993 film Jurassic Park, the dinosaur Dilophosaurus was portrayed with a neck frill that raised when attacking, and generated an increase in demand for frill-necked lizards as pets.

All content from Kiddle encyclopedia articles (including the article images and facts) can be freely used under Attribution-ShareAlike license, unless stated otherwise. Cite this article:
Frill-necked lizard Facts for Kids. Kiddle Encyclopedia.