Quolls ( genus Dasyurus) are carnivorous marsupials native to mainland Australia, New Guinea and Tasmania. They are primarily nocturnal and spend most of the day in a den. Of the six species of quoll, four are found in Australia and two in New Guinea. Another two species are known from fossil remains in Pliocene and Pleistocene deposits in Queensland. Genetic evidence indicates that quolls evolved around 15 million years ago in the Miocene, and that the ancestors of the six species had all diverged by around four million years ago. The six species vary in weight and size, from 300 g (11 oz) to 7 kg (15 lb). They have brown or black fur and pink noses. They are largely solitary, but come together for a few social interactions such as mating which occurs during the winter season. A female gives birth to up to 18 pups, of which only six survive because she only has six teats to feed with.

Quolls eat smaller mammals, small birds, lizards, and insects. Their natural lifespan is between two and five years. All species have drastically declined in numbers since Australasia was colonised by Europeans, with one species, the eastern quoll, becoming extinct on the Australian mainland, now found only in Tasmania. Major threats to their survival include the cane toad, predators such as feral cats and foxes, urban development, and poison baiting. Conservation efforts include breeding programs in captivity, one of which is taking place in Tasmania with support from Rewilding Australia and Conjour. 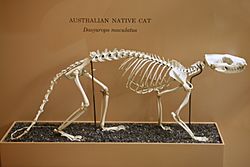 Skeleton of a tiger quoll

Within the genus Dasyurus, the following species exist:

There is at least one fossil species from the Pliocene, that is D. dunmalli. 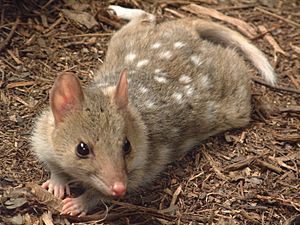 Adults are between 25 and 75 cm (9.8 and 29.5 in) long, with hairy tails about 20 to 35 cm (7.9 to 13.8 in) long. Females have six nipples and develop a pouch during the breeding season, which opens toward the tail (with the exception of the tiger quoll, which has a true pouch) when they are rearing young. Their coats are brown or black, with a sparse scattering of white spots. They have bright pink noses and long snouts. Their natural lifespans are between two and five years; the larger species tend to live longer than the smaller. Quolls are solitary, nocturnal animals. The average weight differs greatly depending on the species; male western and eastern quolls weigh about 1.3 kg (2.9 lb) and females 0.9 kg (2.0 lb). The tiger quoll is the largest, with the male weighing about 7 kg (15 lb) and the female 4 kg (8.8 lb). The northern quoll is the smallest, and the male weighs on average 400 to 900 g (14 to 32 oz), and the female 300 to 500 g (11 to 18 oz). 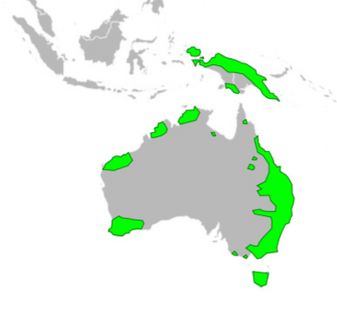 Range of the six species of quoll

Quolls are indigenous to mainland Australia, New Guinea, and Tasmania. The six species were once widely distributed across the three land masses, but are now restricted to only a few areas. Although primarily ground-dwelling, the genus has developed secondary arboreal characteristics. Each species of quoll lives in distinct geographical areas. The tiger quoll and eastern quoll are exclusively mesic zone species, that is they inhabit moister habitats. The western quoll also inhabits mesic habitat, but has adapted to arid regions across inland Australia, while the northern quoll inhabits tropical habitat of high rainfall.

Quolls are carnivorous marsupials. They are primarily nocturnal, sleeping in hollowed-out logs or rocky dens and coming out to hunt during the night, though on rare occasions they can be seen looking for prey during the day. 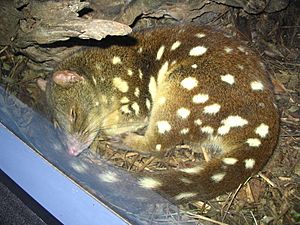 They are mostly ground-dwelling, but it is not uncommon to see a quoll climbing a tree. Quolls mark their territory several kilometres away from their dens. A male's territory often overlaps many females' territories, and male and female quolls only meet for mating. Quolls have communal toilet areas, usually on an outcropping used for marking territory and social functions. These communal latrines may have up to 100 droppings in them. Quolls are mostly solitary creatures, limiting contact with other quolls to mating or other social activities. 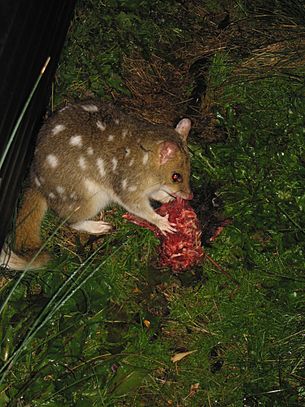 Quolls are mostly carnivorous. The smaller quolls primarily eat insects, birds, frogs, lizards and fruit; the larger species eat birds, reptiles, and mammals, including echidnas and possums. The tiger quoll's diet is dominated by mammals such as brushtail possums, rabbits and hares. The exact mix is variable depending on the availability of prey after bushfires, and can include carrion or bandicoots when food is scarce. The other species of quoll have also been known to eat carrion. The paws and vibrissae of quolls allow them to reach into small burrows to find prey. Quolls hunt by stalking. Depending on the size of its prey, a quoll may leap or pounce on it. Quolls pin small prey down with their front paws while devouring it, and jump onto larger prey, sinking in their claws and closing their jaws around the neck. Quolls can obtain all the water they need from their food, making them quite adaptable during droughts or other periods of water shortage.

Mating occurs during the winter months. Once a female quoll has been impregnated, the folds on her abdomen convert into a pouch that opens at the back. The gestation period is 21 days. A baby quoll, or pup, is the size of a grain of rice. Up to 18 quolls are born in each litter, but only six survive the first two weeks. The survivors stay in their mother's pouch for eight weeks, suckling on one of the mother's six teats for milk. During the ninth week, the pups venture out of the pouch and onto the mother's back, where they remain for six weeks. Quolls reach maturity when they are one year old, and have a natural lifespan of between two and five years. 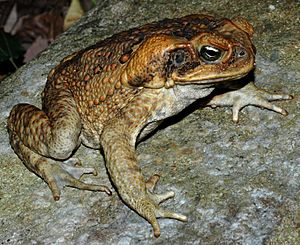 The cane toad is a significant threat to the survival of quolls.

Cane toads were introduced into Queensland in 1935; their numbers have since grown exponentially. These poisonous toads pose a significant threat to the northern quoll, which may die after consuming one. The Department of Sustainability, Environment, Water, Population and Communities has stated that cane toads are highly invasive and are major threats to the survival of quolls.

Predators such as foxes and cats prey on quolls and compete with them for food. For example, both quolls and foxes catch and consume rabbits. Since the introduction of foxes, quoll populations have dropped dramatically. Foxes have been eradicated from many of the islands off the coast of Australia in an effort to protect quolls.

The natural poison fluoroacetate (Compound 1080) is commonly used in Australia to control introduced pests such as European rabbits, foxes, feral predators, and wild dogs such as dingoes. The poison is extremely toxic to introduced pests, but less so to native animals as it is found naturally in many Australian plants. However, juvenile quolls may be susceptible to the poison. Research is underway to determine whether the number of quolls protected from predators may be less than those killed by the poison.

All content from Kiddle encyclopedia articles (including the article images and facts) can be freely used under Attribution-ShareAlike license, unless stated otherwise. Cite this article:
Quoll Facts for Kids. Kiddle Encyclopedia.