The following is a phylogenetic tree based on mitochondrial genome sequences: 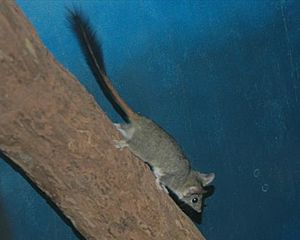 The genus consists of the following three species:

Mating generally happens between May and July. All males die soon after mating. Females give birth to about 6 young ones about 30 days after mating. Phascogales do not have the true pouch that is found in most other marsupials [1][2]. Instead, they form temporary folds of skin - sometimes called a "pseudo-pouch" [3] around the mammary glands during pregnancy. Young stay in this pseudo-pouch area, nursing for about 7 weeks before being moved to a nest where they stay until they are weaned at about 20 weeks of age. Females live for about 3 years, and generally produce one litter.

All content from Kiddle encyclopedia articles (including the article images and facts) can be freely used under Attribution-ShareAlike license, unless stated otherwise. Cite this article:
Phascogale Facts for Kids. Kiddle Encyclopedia.