The northern quoll (Dasyurus hallucatus), also known as the northern native cat, the North Australian native cat, the satanellus or njanmak in the Indigenous Mayali language, djabo in Kunwinjku, and wijingarri in Wunambal, is a carnivorous marsupial native to Australia.

The northern quoll is a member of the family Dasyuridae, and is often stated to be the most distinctive Australian quoll. It was first described in 1842 by naturalist and author John Gould, who gave it the species name hallucatus, which indicates it has a notable first digit. This species has sometimes been placed in a separate genus, Satanellus.

Northern quolls feed primarily on invertebrates, but also consume fleshy fruit (particularly figs), and a wide range of vertebrates, including small mammals, birds, lizards, snakes, and frogs. They also scavenge on roadkills, around campsites, and in garbage tins.

A remarkable feature of this species is that the males show complete die-off after mating, leaving the females to raise the young alone. Females have eight teats in a pouch, but apparently give birth to more than eight young which must wriggle their way to the pouch and compete for a teat to survive. In a study in Western Australia's Kimberley region, the testosterone levels of males peaked in July, and females gave birth in July or August.

In the wild, males live for about one year, while the maximum recorded for a wild female was about three years of age. In rocky habitats, the lifespan of both sexes appears to be increased to two or three years, and individuals are larger than those living in savanna habitats, possibly due to better habitat and reduced predation.

The northern quoll occurs from the Pilbara region of Western Australia across the Northern Territory to south east Queensland. Their historical range extended uninterrupted from S.E Queensland to the Kimberleys in Western Australia. There are several disjunct populations. This quoll species is most abundant in rocky ranges and open eucalypt forest. 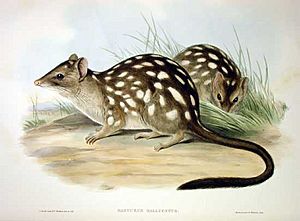 The northern quoll is currently classified as Endangered by the IUCN.

The species is now absent from many parts of its former range, particularly the savanna country. In 2005 it was listed as Endangered under Australian Commonwealth legislation (EPBC Act). Threats are predation by feral cats, dingoes and foxes, particularly after fire or grazing has removed protective ground cover. Destruction, degradation, and fragmentation of the quoll's habitat due to land clearing, grazing, pasture improvement, and mining are also significant. Quolls are also susceptible to being run over on roads.

The current major threat to the northern quoll in the northern and western portion of its range is the spread of cane toads. Like many other native Australian species, northern quolls are poisoned after eating or mouthing cane toads. Cane toads were originally introduced in Queensland, but have now occupied the Top End of the Northern Territory, including Kakadu National Park and the Darwin area, and entered the Kimberley region of Western Australia, where they are established around Kununurra and Lake Argyle.

Immediately after cane toad invasion of Kakadu, quolls became extinct at one study site and declined from 45 individuals to five at another site. The northern quoll may cease to exist in most areas in the Top End once the cane toad population completely overlaps the northern quoll's range. However, remnant populations of northern quolls still persist in Queensland where cane toads have been present for decades. These persisting Queensland quoll populations are naturally toad averse (as observed on remote cameras). One of the northern quoll populations studied in Kakadu during the recent cane toad invasion, had a few individuals survive the invasion. These individuals were, likely similar to the Queensland quolls, genetically averse to the toads. In 2003, to help protect northern quolls, numerous quolls were transferred to the toad-free English Company Islands (Astell and Pobassoo Islands), off the coast of Arnhem Land. Quolls thrived on these islands, with an estimated population of 2193 female northern quolls on Astell Island by 2014. In 2017, quolls from Astell Island were collected, trained via conditioned taste aversion to avoid attacking cane toads and reintroduced to Kakadu National Park. This reintroduction attempt saw the release both toad-trained (22) and toad-naive (9) northern quolls to an area of Kakadu that previous had quolls but where they had recently gone locally extinct due to the invasion of cane toads. Although the toad-trained quolls survived longer than those that received no toad training, ultimately this reintroduction population rapidly went extinct because of dingo predation. Subsequently, research comparing antipredator behaviours of quolls from Astell Island and mainland Queensland determined that quolls conserved on this island had lost their ability to recognise and avoid both dingo and cats, predators they have co-evolved with on mainland Australia for at least 3500 and 150 years respectively. This study suggests that animals conserved in complete isolation from predators can rapidly lose evolved antipredator behaviours, in this case in only 13 generations, when they are no longer maintained via natural selection.

All content from Kiddle encyclopedia articles (including the article images and facts) can be freely used under Attribution-ShareAlike license, unless stated otherwise. Cite this article:
Northern quoll Facts for Kids. Kiddle Encyclopedia.