The family of Joe Biden, the 46th and current president of the United States, is an American family, prominent in law, education, activism and politics. Biden's immediate family became the first family of the United States on his inauguration on January 20, 2021. The Biden family are of English, French and Irish descent. Biden's great-great-great-grandfather immigrated from England to Maryland in 1822.

Neilia Hunter Biden, the first wife of Joe Biden, was born on July 28, 1942. The couple married on August 27, 1966. After the wedding, the Bidens moved to Wilmington, Delaware, where Biden was on the New Castle County Council. The couple had three children: Joseph Robinette "Beau" III, Robert Hunter and Naomi Christina "Amy". Biden campaigned to unseat U.S. Senator from Delaware J. Caleb Boggs and Neilia was described by The News Journal as the "brains" of his campaign.

On December 18, 1972, shortly after her husband became U.S. senator-elect, Neilia was driving with children Naomi, Beau and Hunter to buy a Christmas tree when their car was hit by a tractor-trailor. Neilia and her three children were taken to Wilmington General Hospital. Neilia and Naomi died upon arrival, but her two sons survived with serious injuries. Biden was sworn into the Senate on January 3, 1973 at the hospital where his sons were being treated.

Jill Tracy Jacobs Biden (née Jacobs, formerly Stevenson), the second and current wife of Joe Biden, was born on June 3, 1951. She met Biden while on a blind date in March 1975. 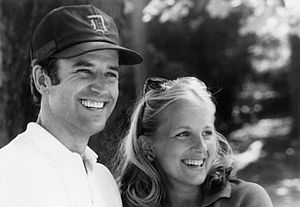 Joe and Jill, soon after meeting in the 1970s

She and Joe Biden were married by a Catholic priest on June 17, 1977, at the Chapel at the United Nations in New York City. This was four and a half years after his first wife and infant daughter died; Joe had proposed several times before she accepted, as she was wary of entering the public spotlight, anxious to remain focused on her own career, and initially hesitant to take on the commitment of raising his two young sons who had survived the accident.

Joe Biden fathered four children from two marriages. His firstborn daughter, Naomi Christina Biden, died in 1972, after the same car accident as her mother, and his firstborn son, Joseph "Beau" R. Biden III, died in 2015 after a fight with brain cancer. The Bidens' two surviving children include one son from his first marriage, Robert Hunter Biden, and one daughter from his second, Ashley Blazer Biden.

Joseph "Beau" Robinette Biden III was born on February 3, 1969 in Wilmington, Delaware. In the car crash that took the lives of his mother and sister, Beau suffered multiple broken bones, but survived after spending several months in the hospital. Beau went on to graduate from Archmere Academy, his father's high school alma mater, and the University of Pennsylvania in 1991, where he was a member of the Psi Upsilon fraternity. He was also a graduate of Syracuse University College of Law, as was his father. After graduating from law school, he clerked for Judge Steven McAuliffe of the United States District Court of New Hampshire. From 1995 to 2004, he worked at the United States Department of Justice in Philadelphia, first as Counsel to the Office of Policy Development and later as a federal prosecutor in the U.S. Attorney's Office.

In his first bid at political office, Biden ran for Attorney General of Delaware in 2006. Biden's opponent was a veteran state prosecutor and Assistant U.S. Attorney, Ferris Wharton.

Beau played an active role in his father's 2008 vice presidential campaign, speaking at the Democratic National Convention after Joe Biden was nominated for Vice President of the United States. He recounted the auto accident that killed his mother and sister and the subsequent parenting commitment his father made to his sons, a speech at which many delegates wept.

On November 2, 2010, he was easily re-elected to a second term as Delaware Attorney General, beating Independent Party of Delaware candidate Doug Campbell by a large margin.

For the final few years of his life, Biden suffered from a brain tumor. In May 2010, he was admitted to Christiana Hospital in Newark, Delaware, after complaining of a headache, numbness, and paralysis. Officials stated that he had suffered a "mild stroke." Later that month, Biden was transferred to Thomas Jefferson University Hospital in Philadelphia and kept for observation for several days.

In August 2013, Biden was admitted to the University of Texas MD Anderson Cancer Center in Houston and diagnosed with brain cancer, after experiencing what White House officials called "an episode of disorientation and weakness." A lesion was removed at that time. Biden had radiation and chemotherapy treatments and the cancer remained stable. On May 20, 2015, he was admitted to Walter Reed National Military Medical Center in Bethesda, Maryland, because of a recurrence of brain cancer. He died there 10 days later, on May 30, 2015, at age 46. His funeral was held at St. Anthony of Padua Roman Catholic Church in Wilmington, Delaware, on June 6, 2015. He was buried at St. Joseph's on the Brandywine in Greenville, Delaware.

Robert Hunter Biden was born on February 4, 1970 in Wilmington, Delaware. Along with his mother and siblings, he was in the 1972 crash, sustaining injuries to his skull. Along with his older brother, he survived after receiving months of medical treatment.

Like his father and brother, Hunter attended Archmere Academy in Claymont, Delaware. He graduated with a Bachelor of Arts degree in History from Georgetown University in 1992. During the year after he graduated from college, he served as a Jesuit volunteer at a church in Portland, Oregon and met Kathleen Buhle, whom he married in 1993. After attending Georgetown University Law Center for one year, he transferred to Yale Law School and graduated in 1996.

After law school, Hunter accepted a position at bank holding company MBNA America, a major contributor to his father's political campaigns. By 1998, Biden had risen to the rank of executive vice president

During the 2020 election, Hunter was targeted by the Trump administration due to his connections with Ukrainian holdings company Burisma, arguing that Joe Biden engaged in nepotism to get Hunter his position as a member of the board.

Naomi Christina Biden, nicknamed "Amy", was born on November 8, 1971 in Wilmington, Delaware. She died in the same crash as her mother Neilia on December 18, 1972, when she was just over a year old.

Ashley Blazer Biden was born on June 8, 1981 in Wilmington, Delaware. She is the only child from Joe Biden's second marriage.

Biden attended Wilmington Friends School, a private school run by the Religious Society of Friends in Wilmington. When Biden was in elementary school, she discovered that the cosmetics company Bonne Bell tested its products on animals. She wrote a letter to the company asking them to change their policy on animal testing. She later got involved in dolphin conservation, inspiring her father to work with Congresswoman Barbara Boxer to write and pass the 1990 Dolphin Protection Consumer Information Act. Biden made an appearance before members of the United States Congress to lobby for the legislation.

Joe Biden has married twice and fathered four children. His seven grandchildren come from his two sons, five from Hunter and two from Beau.

Biden has two dogs, Champ and Major, who are both German Shepherds. 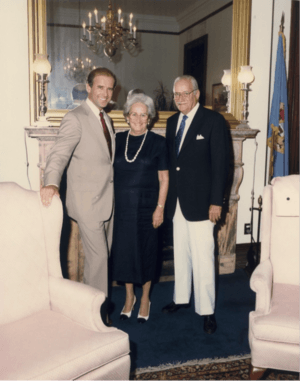 Joe Biden (left) with his mother and father in the 1970s

Joe Biden's father Joseph Sr. was initially wealthy but suffered financial setbacks around the time Joe was born, and for several years the family lived with Jean's parents (Joe's maternal grandparents). Scranton fell into economic decline during the 1950s and Joseph Sr. could not find steady work. Beginning in 1953, the family lived in an apartment in Claymont, Delaware, then moved to a house in Wilmington, Delaware. Joseph Sr. later became a successful used car salesman, maintaining the family in a middle-class lifestyle.

All content from Kiddle encyclopedia articles (including the article images and facts) can be freely used under Attribution-ShareAlike license, unless stated otherwise. Cite this article:
Family of Joe Biden Facts for Kids. Kiddle Encyclopedia.