The German Shepherd (German: Deutscher Schäferhund), also known as the Alsatian, is a breed of medium-large dog. It was first developed in Germany in an area called Alsace. They are often used as police dogs, but they have many other uses. They have been used as herding dogs, guard dogs and as pets.

An important modern use is the dog's ability to perform search and rescue. In former times the American Rescue Dog Association only used air-scenting Alsatians to locate people who are missing or lost. They search in wilderness, disaster, human body remains and water search and rescue and recovery missions. The breed is smart, athletic and can live in a wide variety of climate conditions.

German Shepherds are medium to large-sized dogs. The breed standard height at the withers is 60–65 cm (24–26 in) for males and 55–60 cm (22–24 in) for females. German Shepherds are longer than tall, with an ideal proportion of 10 to 8 1/2. The AKC official breed standard does not set a standard weight range. They have a domed forehead, a long square-cut muzzle with strong jaws and a black nose. The eyes are medium-sized and brown with a lively, intelligent and self-assured look. The ears are large and stand erect, open at the front and parallel, but they often are pulled back during movement. A German Shepherd has a long neck, which is raised when excited and lowered when moving at a fast pace. The tail is bushy and reaches to the hock.

German Shepherds have a two-layer coat which is close and dense with a thick undercoat. The coat is accepted in two variants; medium and long. The long-hair gene is recessive, making the long-hair variety rarer. Treatment of the long-hair variation differs across standards; they are accepted but not competed with standard coated dogs under the German and UK Kennel Clubs while they can compete with standard coated dogs but are considered a fault in the American Kennel Club. The FCI accepted the long-haired type in 2010, listing it as the variety b—while short-haired type is listed as the variety a.

Most commonly, German Shepherds are either tan/black or red/black. Most colour varieties have black masks and black body markings which can range from a classic "saddle" to an over-all "blanket." Rarer colour variations include the sable, pure-black, pure-white, liver and blue varieties. The all-black and sable varieties are acceptable according to most standards; however, the blue and liver are considered to be serious faults and the all-white is grounds for instant disqualification from showing in conformation at All Breed and Specialty Shows.

German Shepherds were bred specifically for their intelligence, a trait for which they are now famous. In the book The Intelligence of Dogs, author Stanley Coren ranked the breed third for intelligence, behind Border Collies and Poodles. He found that they had the ability to learn simple tasks after only five repetitions and obeyed the first command given 95% of the time. Coupled with their strength, this trait makes the breed desirable as police, guard and search and rescue dogs, as they are able to quickly learn various tasks and interpret instructions better than other breeds. 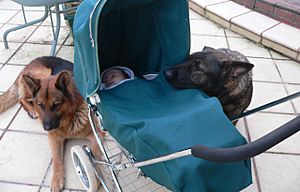 German Shepherds are well renowned for their protectiveness over family members

German Shepherds are moderately active dogs and are described in breed standards as self-assured. The breed is marked by a willingness to learn and an eagerness to have a purpose. They are curious, which makes them excellent guard dogs and suitable for search missions. They can become over-protective of their family and territory, especially if not socialized correctly. They are not inclined to become immediate friends with strangers. German Shepherds are highly intelligent and obedient, as well as being protective of their owners. 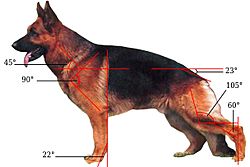 The structure of the body of GSD

Use as working dog

German Shepherds are a popular selection for use as working dogs. They are especially well known for their police work, being used for tracking criminals, patrolling troubled areas and detection and holding of suspects. Additionally thousands of German Shepherds have been used by the military. Usually trained for scout duty, they are used to warn soldiers to the presence of enemies or of booby traps or other hazards. German Shepherds have also been trained by military groups to parachute from aircraft or as anti-tank weapons. They were used in World War II as messenger dogs, rescue dogs and personal guard dogs. A number of these dogs were taken home by foreign servicemen, who were impressed by their intelligence.

German Shepherds are still used for herding and tending sheep grazing in meadows next to gardens and crop fields. They are expected to patrol the boundaries to keep sheep from trespassing and damaging the crops. In Germany and other places these skills are tested in utility dog trials also known as HGH (Herdengebrauchshund) herding utility dog trials.

One Mexican German Shepherd, Zuyaqui, was dissected and his body put on display at the Sedena's "Narco Museum" in Mexico. He is regarded to be the dog who has captured the most drugs in Mexican police and military history.

In the 1800s northwest Europe (Belgium, Germany, Netherlands) the most common dog used to herd sheep and protect the homes was the so-called "continental shepherd dog". These dogs all looked very similar at that time, and it was around 1890 that the three breeds (Belgian Shepherd, German Shepherd and Dutch Shepherd) went their separate ways. Of those breeds, the Dutch shepherd looks closest to the continental shepherd of that time. 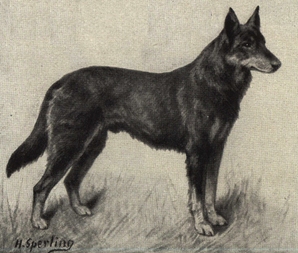 Illustration of a German Shepherd from 1909

During the 1850s, attempts were being made to standardize dog breeds. Dogs were being bred to preserve traits that assisted in their job of herding sheep and protecting their flocks from predators. In Germany this was practiced within local communities, where shepherds selected and bred dogs. It was recognized that the breed had the necessary skills for herding sheep, such as intelligence, speed, strength and keen senses of smell. The results were dogs that were able to do such things, but that differed significantly, both in appearance and ability, from one locality to another.

To combat these differences, the Phylax Society was formed in 1891 with the intention of creating standardised development plans for native dog breeds in Germany. The society disbanded after only three years due to ongoing internal conflicts regarding the traits in dogs that the society should promote; some members believed dogs should be bred solely for working purposes, while others believed dogs should be bred also for appearance. While unsuccessful in their goal, the Phylax Society had inspired people to pursue standardising dog breeds independently.

With the rise of large, industrialized cities in Germany, the predator population began to decline, rendering sheepdogs unnecessary. At the same time, the awareness of sheepdogs as a versatile, intelligent class of canine began to rise. Max von Stephanitz, an ex-cavalry captain and former student of the Berlin Veterinary College, was an ex-member of the Phylax Society who firmly believed dogs should be bred for working. He admired the intelligence, strength and ability of Germany's native sheepdogs, but could not find any one single breed that satisfied him as the perfect working dog.

In 1899, Von Stephanitz was attending a dog show when he was shown a dog named Hektor Linksrhein. Hektor was the product of few generations of selective breeding and completely fulfilled what Von Stephanitz believed a working dog should be. He was pleased with the strength of the dog and was so taken by the animal's intelligence, loyalty and beauty, that he purchased him immediately. After purchasing the dog he changed his name to Horand von Grafrath and Von Stephanitz founded the Verein für Deutsche Schäferhunde (Society for the German Shepherd Dog). Horand was declared to be the first German Shepherd Dog and was the first dog added to the society's breed register.

Horand became the centre-point of the breeding programs and was bred with dogs belonging to other society members that displayed desirable traits and with dogs from Thuringia, Franconia and Wurttemberg. It is believed the society accomplished its goal mostly due to Von Stephanitz's strong, uncompromising leadership and he is therefore credited with being the creator of the German Shepherd Dog. 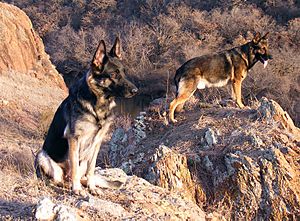 The breed was named Deutscher Schäferhund by von Stephanitz, literally translating to "German Shepherd Dog". The breed was so named due to its original purpose of assisting shepherds in herding and protecting sheep. At the time, all other herding dogs in Germany were referred to by this name; they thus became known as Altdeutsche Schäferhunde, or Old German Shepherd Dogs.

The direct translation of the name was adopted for use in the official breed registry; however, at the conclusion of World War I, it was believed that the inclusion of the word "German" would harm the breed's popularity, due to the anti-German sentiment of the era. The breed was officially renamed by the UK Kennel Club to "Alsatian Wolf Dog", after the French region of Alsace bordering Germany. This name was also adopted by many other international kennel clubs.

Eventually, the appendage "wolf dog" was dropped, after numerous campaigns by breeders who were worried that becoming known as a wolf-dog hybrid would affect the breed's popularity and legality. The name Alsatian remained for five decades, until 1977, when successful campaigns by dog enthusiasts pressured the British kennel clubs to allow the breed to be registered again as German Shepherds. The word "Alsatian" still appeared in parentheses as part of the formal breed name and was only removed in 2010. 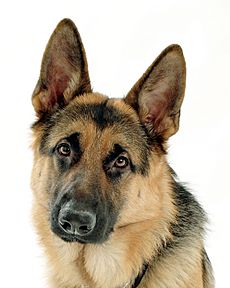 When the UK Kennel accepted registrations in 1919, 54 German Shepherds were registered. By 1926 this number had grown to over 8,000. The breed gained international recognition after the decline of World War I. Returning soldiers spoke highly of the breed and animal actors Rin Tin Tin and Strongheart popularised the breed further. The first German Shepherd Dog registered in the United States was Queen of Switzerland. Her offspring suffered from defects as the result of poor breeding, which caused the breed to suffer a decline in popularity during the late 1920s.

Popularity increased again after the German Shepherd Sieger Pfeffer von Bern became the 1937 and 1938 Grand Victor in American Kennel club dog shows, only to suffer another decline at the conclusion of World War II, due to anti-German sentiment. Popularity increased gradually until 1993, when they became the third most popular breed in the United States. As of 2016, the German Shepherd is the second most popular breed in the US. Additionally, the breed is typically among the most popular in other registries. The German Shepherd Dog's physique is very well suited to competing in shows and competitions, such as agility trials. 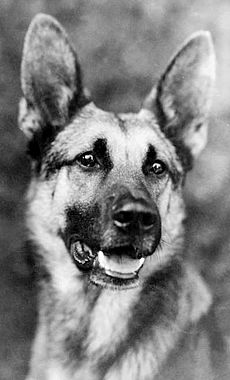 Strongheart, one of the earliest canine stars (1921)

German Shepherds have been featured in a wide range of media. In 1921 Strongheart became one of the earliest canine film stars, and was followed in 1922 by Rin Tin Tin, who is considered the most famous German Shepherd. Both have stars on the Hollywood Walk of Fame. German Shepherds were used in the popular Canadian series The Littlest Hobo.

A German Shepherd called Inspector Rex is the star of Austrian Police procedural drama program, which won many awards, where German Shepherd Rex assists the Vienna Kriminalpolizei homicide unit. The show was aired in many languages.

All content from Kiddle encyclopedia articles (including the article images and facts) can be freely used under Attribution-ShareAlike license, unless stated otherwise. Cite this article:
German Shepherd Facts for Kids. Kiddle Encyclopedia.