Westlake is a residential and commercial neighborhood in Central Los Angeles, California. It was developed in the 1920s, but many of its elegant mansions have been turned into apartments, and many new multiple-occupancy buildings have been constructed.

Westlake is a high-density area, with a young and heavily Latino population. It has a score of primary and secondary schools.

The 2000 U.S. census counted 108,839 residents in the 2.72-square-mile neighborhood—an average of 38,214 people per square mile, the second-highest density of any community in Los Angeles County, after Koreatown. In 2008 the city estimated that the population had increased to 117,756. It was estimated in 1993 that 85,000 people lived within a mile of the Alvarado/MacArthur Park Red Line station and that the density of this neighborhood rivaled that of Manhattan in New York City. Another report the same year said that at 147 people per acre Westlake had four times the average density of Manhattan and that "The vast majority of units are occupied by more than one family. Firefighters often find babies sleeping in dresser drawers, and children in closets that serve as their bedrooms." Nevertheless, census takers found that the average household size of three people was about the same as the rest of the city. Renters occupied 94.9% of the housing units, and house or apartment owners just 5.1%

Heavily Latino, Westlake was considered "not especially diverse" ethnically. The breakdown was Latinos, 73.4%; Asians, 16.5%; whites, 4.5%; blacks, 3.9%, and others, 1.7%. Mexico (36.8%) and El Salvador (17.2%) were the most common places of birth for the 67.6% of the residents who were born abroad, a figure that was considered high compared to the city as a whole. The median age for residents was 27, considered young for both the city and the county.

The street boundaries on Mapping L.A. are the Hollywood Freeway on the north, Glendale Boulevard and Second Street on the east, Beaudry Avenue and the Harbor Freeway on the southeast, West Olympic Boulevard on the southeast and south, Westmoreland Avenue, Wilshire Place and Virgil Avenue on the west, and Temple Street and Hoover Street on the northwest.

Relation of Westlake to other communities:

In 1887, Westlake was referred to as the "southwest quarter" of Los Angeles. The Westlake hills were already "dotted with fine residences, and it is plainly to be seen that the development of this quarter is in its infancy. The Bonnie Brae, Westlake Park and other tracts in the neighborhood have been almost wholly disposed of by the subdividers, and many of the lots have passed into second and third hands, at advancing prices. The Baptist College, now well under way, looms up to the northward."

The neighborhood was named for Westlake Park, the land for which had been donated by Henricus Wallace Westlake, a Canadian physician who moved to Los Angeles around 1888. He built his house on Burlington Avenue in the district that later bore his name; the residence was the first to rise in the rolling hills west of the more settled and built-up part of the town. 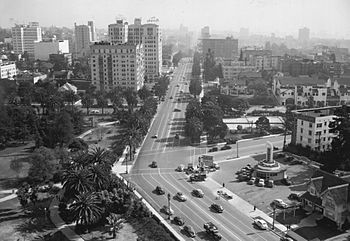 One of the first areas of Los Angeles west of Figueroa Street to see residential development, Westlake came to have a significant Jewish population). Wealthy businessmen commuted to downtown, Wilshire Center (now Koreatown), Hollywood, and the Miracle Mile from the district's Spanish Revival and Art Deco mansions. Around the 1940s the district's northwestern blocks fringed the home of Los Angeles' early working class Filipino population who were shifted from what is today Little Tokyo and Bunker Hill, some of which remain in parts of Westlake and nearby neighborhoods like Echo Park, Silver Lake, and East Hollywood.

In 1899 newly drilled oil wells in the area, with their unsightly derricks, were said to cause pollution and runoff in the streets "at every hard rain," and residents of the neighborhood were "indignant that nothing was done for their relief." The city had declared a 1,600-foot zone around Westlake Park where drilling was forbidden (later modified to 1,000 feet), but the legality of that ordinance was under attack by oilmen such as W.E. de Groot. Even City Attorney Walter F. Haas thought the law was invalid, although he had to defend it as part of his duty. Nevertheless, a Superior Court judge, in the case of People v. Richard Green and others, held the city law to be valid. By 1900, however, it was found that oil production in Westlake had been, in effect, "pumped dry," and the situation ceased to make news.

Residents were alarmed in May 1919 by a petition being circulated by entrepreneur Arthur Evans to build a "high-class," six-story building on the southwest corner of Westlake Avenue and Orange Street "for the manufacture of women's apparel."

Supposedly having the backing of 85% of property owners adjoining the site in the affected Lazard tract, the promoters said they wanted to build in the Lakewood District because they could not get the kind of women workers they sought if they built in the city's industrial district, with its associated smoke and dust. They promised the employment of 1,000 workers, mostly women, as well as a school to teach "the finer grades of needlework" and a permanent exhibition space devoted to showing how garments are made. A "mammoth petition of protest" was presented to a City Council committee on June 12 by a throng of opponents and the applicant, identified and the Brownstein-Lewis Company, withdrew the plan and never resubmitted it. 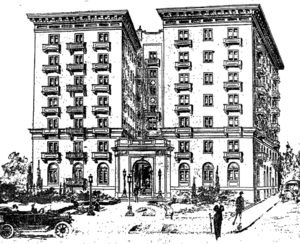 Sketch of apartment building on the northwest corner of Sixth and Lake, 1915. It later became the Hotel Ansonia 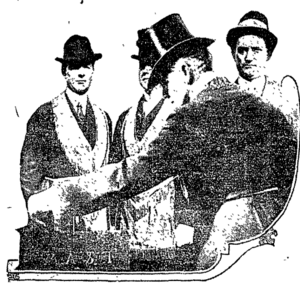 In its early years, Westlake was considered one of the most desirable residential areas in the city – "the new gathering place for the city's carriage trade," as one observer recalled in 1997. With time, though, as another put it, "The white gentry fled to Encino and Westwood, leaving their ghost buildings behind them."

In the 1980s the neighborhood was infused with refugees from Central American countries like El Salvador, where a civil war had displaced a million people. In time, young Salvadorans formed a gang called Mara Salvatrucha, meaning, roughly, Gang of the Salvadoran Guy; for short, it was labeled MS-13. In time, the gang had spread to 33 other states and five countries.

By 1990 Westlake had become a grim area.

Just 17 years later, though, crime had dropped and Westlake was on a road to gentrification. As rentals and property values in Downtown Los Angeles and nearby Koreatown rose, artists and other creative people moved into Westlake. "Swanky nightclubs, organic tamale co-ops and art galleries" followed. The change was traced to intensive anti-crime and cleanup efforts in MacArthur Park, particularly since the installation of surveillance cameras in 2004. A business improvement district was formed.

In January 2012, the city launched a campaign under a new city ordinance dealing with illegal street vendors throughout Los Angeles, but with principal effect in Westlake and the Venice neighborhood. The ordinance outlawed the sale of items with "utilitarian value," like socks and T-shirts but allowed vendors to sell art objects. A city-sponsored weekend market was set up, which required vendors to undergo training and licensing.

Substandard housing has been a problem in Westlake, and government has attempted to remedy the situation.

In 1990 a jury convicted a landlord of 23 counts of having slum conditions at a building he owned at 737 S. Westlake Ave. in Los Angeles. Devanand Sharma failed to provide tenants with heat, did not repair broken windows, fire doors and smoke detectors, and kept walls, ceilings and plumbing in a deteriorated condition. His brother was dubbed the city's "worst slumlord" after a 1987 conviction for slum conditions and had been a fugitive for two years.

In 1993, in the wake of a deadly fire on Burlington Avenue (see Notable fires, below), major reforms proposed to help avert similar tragedies had not been implemented, and serious fire safety violations persisted in the Westlake and Pico-Union areas. Plans for new fees, a fire-inspection task force and a computerized record-keeping system were stalled. But fire officials said that budget constraints and the city bureaucracy thwarted their plans. Nevertheless, in that year an appeals court said that a trial could go ahead against Highland Federal Bank, even though it was not an actual owner; it was accused of operating a network of slum buildings in Los Angeles, for one of which, the Cameo Hotel at 504 South Bonnie Brae Street in Westlake, the owner was listed as "Teluce Black," a Labrador retriever. That decision set a statewide precedent. Authorities alleged the bank knowingly helped finance purchases in Westlake, Echo Park, Hollywood, South-Central, Koreatown and Pico-Union by buyers who had no means and no intention of keeping the structures in repair. Slum conditions were cleaned up after the suit was filed, and, in a 1996 settlement, the bank agreed to pay $1.4 million to tenants, to the city and to public-interest attorneys.

In 1999 a judge sentenced another landlord to live in a room on the fifth floor of the man's six-story, 96-unit building at 744 S. Beacon Ave. The owner had to remain there from 7 p.m. until 7 a.m. for 45 consecutive days. During the other hours he was allowed to supervise repairs to the building. The landlord had been found guilty of 12 code violations, including broken fire doors, fire escape drop-ladders that did not work, blocked fire-sprinkler controls, broken windows, broken and missing smoke detectors and exposed live electrical wiring. He had to pay $1,774 in fines and perform 100 hours of community service. Other legal action followed against other slum building owners.

Public transportation in Westlake was first proposed in 1887 by railroad entrepreneurs Herman Silver and J.F.Crank as a double-track street cable railroad with the western terminus at Seventh and Alvarado streets and the eastern at "the proposed union depot of the Atchison, Topeka and Santa Fe Railroad Company near the western extremity of the First Street Bridge," later amended to continue the road along First Street to Aliso Avenue and Chicago Street. In return for the franchise, the two men offered to donate $10,000 to the city. The railway ran to the southeastern corner of Westlake Park. There is now a Westlake/MacArthur Park station of the Los Angeles County Metro Rail System whose entrance is across Alvarado Street from MacArthur Park. 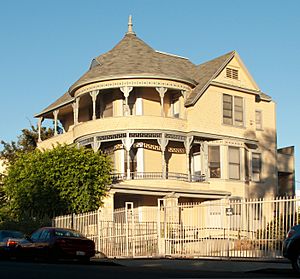 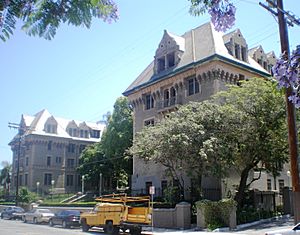 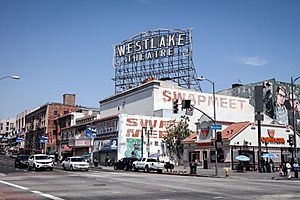 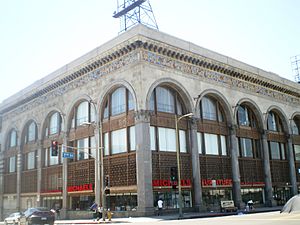 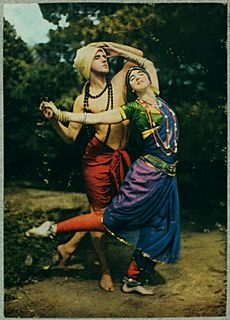 All content from Kiddle encyclopedia articles (including the article images and facts) can be freely used under Attribution-ShareAlike license, unless stated otherwise. Cite this article:
Westlake, Los Angeles Facts for Kids. Kiddle Encyclopedia.