The Elks Lodge No. 99 / Park Plaza Hotel, now The MacArthur, is located at 607 Park View Street just off Wilshire Boulevard near downtown Los Angeles, California. Completed in 1926, it was designed by architect Claud Beelman, later to become renowned an Art Deco designer, when he was practicing as Curlett + Beelman. 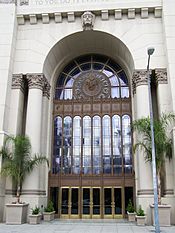 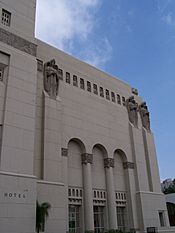 Detail of the northeast corner

The building was originally designed for the use of the Benevolent and Protective Order of Elks (B.P.O.E). The building still has a brass sculpture of a set of elk antlers embedded in the clock above the grand entry to the building.

At the time, the Elks membership numbered thousands and included L.A.'s wealthy and powerful. The building contained 169 hotel rooms but was mainly designed for the Elk’s activities and events, with lavish interiors, including an impressive spacious foyer, a huge ballroom that could be used as an auditorium, numerous dining rooms, a gymnasium, pool, and a bowling alley.

Designed as a memorial to World War I soldiers, the exterior features stylized Assyrian friezes, sculpted figures in military uniform, and massive cast stone warrior angels guarding the plinth and tower at every corner.The lavish interior features an arched ceiling painted by famed muralist Anthony Heinsbergen, who purposely undercut the competition bidding for the job and toiled on his back while painting, like Michelangelo. Heinsbergen later claimed that he rarely bothered with self-promotion again.

In the 1960s, the Elks sold the building due to shrinking membership, and the building was transformed into the luxury Park Plaza Hotel, overlooking the then-glamorous MacArthur Park. In the 1980s the hotel became the site of after hours nightclubs like Power Tools. In 2016 it was announced that the hotel will be restored by DCGG Park Plaza, the development group responsible for restoring the Roosevelt Hotel on Hollywood Boulevard.

Despite the surrounding neighborhood's period of urban decay and renewal, the building endured as a classic example of Beelman's architecture still standing in the modern world. For a time, the building remained vacant, seeing use mainly as rental locations for film, television, and music video shoots and special events. In 1983, the City of Los Angeles designated the building as City of Los Angeles Cultural Affairs Department Historic-Cultural Monument No. 267. This is significant in that many other Wilshire Boulevard area landmarks fell prey to the wrecking ball during that time period, such as the notable Brown Derby. Luckily, despite the demolition of important landmarks all around it, the grand entrance and ballroom of the Elk's No. 99 / Park Plaza building still bears its old jazz age grandeur, much to the relief of Los Angeles architectural aficionados. The elaborate interior murals and decorative paintings were designed and executed by Anthony Heinsbergen and Co, noted painter of many Los Angeles cultural landmarks. The central design of the lobby ceiling is based on the Villa Madama, a Renaissance era project by Raphael and Giulio Romano. 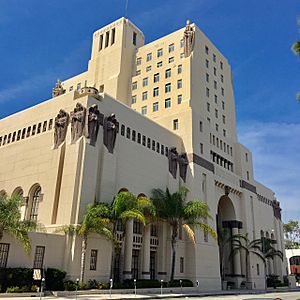 East façade of the Park Plaza Hotel, across from MacArthur Park

Claud Beelman (1883–1963) was a prominent architect in his day, having worked his way up from a lowly draftsman in the midwest at the turn of the 20th century, to one of the popular architects in all of Los Angeles, if judged by the importance given the innumerable structures still standing that still bear his name. Sadly, Beelman was nearly forgotten in the modern age until the Wilshire Center and downtown areas of Los Angeles went through a recent renaissance and, luckily, the beauty of Beelman's austere body of work has been discovered by a new fan base internationally.

All content from Kiddle encyclopedia articles (including the article images and facts) can be freely used under Attribution-ShareAlike license, unless stated otherwise. Cite this article:
Park Plaza Hotel (Los Angeles) Facts for Kids. Kiddle Encyclopedia.