Pico-Union is a neighborhood in Central Los Angeles, California. The name "Pico-Union" refers to the neighborhood that surrounds the intersection of Pico Boulevard and Union Avenue. Located immediately west of Downtown Los Angeles, it is home to over 40,000 residents.

The neighborhood contains two historic districts, both listed in the National Register of Historic Places.

It has five public schools as well as a public library.

Pico-Union is flanked by Koreatown and Westlake to the north and northeast, Downtown to the east, Adams-Normandie, University Park and Exposition Park to the south and Harvard Heights to the west.

The neighborhood is bounded on the north and northeast by Olympic Boulevard, on the east by the 110 Freeway, on the south by the Santa Monica Freeway and on the west by Normandie Avenue. It also includes the California Highway Patrol station beneath the freeway interchange northeast of Washington Boulevard.

Relation of Pico-Union to other communities: 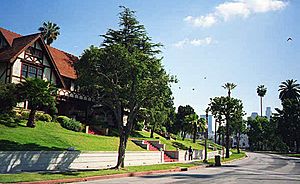 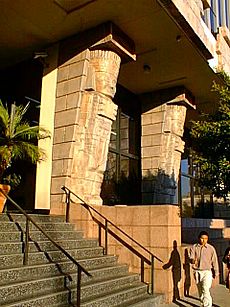 The area encompassed by Pico-Union was developed as a middle and upper middle class residential district beginning in the 1910s. Easy access to downtown Los Angeles and the nearby Wilshire District drew large numbers of affluent homeowners. Following the Second World War, the Pico-Union area, like many inner city neighborhoods, experienced an outflux of residents to the suburbs. The loss of residents and business led to high vacancy rates and lower property values in much of the neighborhood by the 1960s.

In the late 1970s and 1980s, the area became a major point of entry for Salvadoran and Guatemalan immigrants seeking refuge from civil war, according to the Pico Union Self-Guided Walking Tour, published in 2009 by the Los Angeles Conservancy.

In August 2012, the City of Los Angeles designated a portion of Vermont Avenue in Pico-Union as El Salvador Community Corridor; parts of Pico-Union is also being considered to be designated as Central American Historical District.

The former First Church of Christ, Scientist, once one of Jim Jones' Peoples Temples, was located in Pico-Union, at the corner of Alvarado Street and Alvarado Terrace.

Pico-Union is the fourth-most-crowded neighborhood in Los Angeles, surpassed only by East Hollywood, Westlake and Koreatown. The 2000 U.S. census counted 42,324 residents in the 1.67-square-miles neighborhood—an average of 25,352 people per square mile. In 2008, the city estimated that the population had increased to 44,664. The median age for residents was 27, considered young for the city and the county.

The median household income in 2008 dollars was $26,424, considered low for both the city and the county. The percentage of households earning $20,000 or less was high, compared to the county at large. The average household size of 3.3 people was relatively high for Los Angeles. Renters occupied 90.5% of the housing units, and home- or apartment owners the rest.

The percentages of never-married men (43.4%) and never-married women (36.2%) were among the county's highest. The census found 2,113 families headed by single parents, the 23.3% rate being considered high for both the city and the county.

In 2000 there were 667 military veterans living in Pico-Union, or 2.3% of the population, considered a low rate for the city and the county overall. 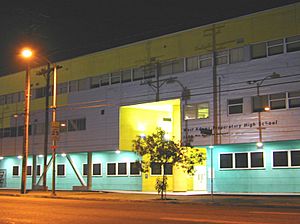 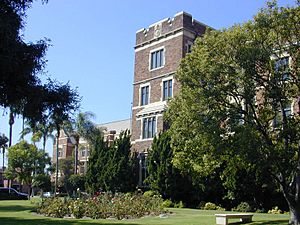 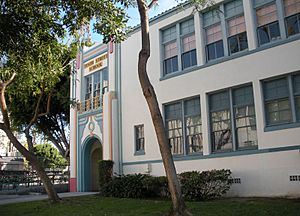 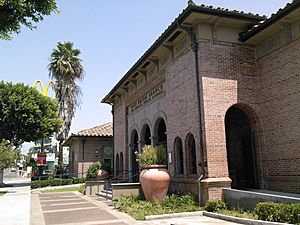 Pico-Union residents aged 25 and older holding a four-year degree amounted to 6.7% of the population in 2000, considered low for both the city and the county, and there was a high percentage of residents with less than a high school diploma.

These are the elementary or secondary schools within the neighborhood's boundaries:

All content from Kiddle encyclopedia articles (including the article images and facts) can be freely used under Attribution-ShareAlike license, unless stated otherwise. Cite this article:
Pico-Union, Los Angeles Facts for Kids. Kiddle Encyclopedia.