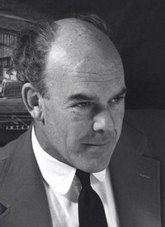 John Edward Lautner (16 July 1911 – 24 October 1994) was an American architect. Following an apprenticeship in the mid-1930s with the Taliesin Fellowship led by Frank Lloyd Wright, Lautner opened his own practice in 1938, where he worked for the remainder of his career. Lautner practiced primarily in California, and the majority of his works were residential. Lautner is perhaps best remembered for his contribution to the development of the Googie style, as well as for several Atomic Age houses he designed in the late 1950s and early 1960s, which include the Leonard Malin House, Paul Sheats House, and Russ Garcia House.

All content from Kiddle encyclopedia articles (including the article images and facts) can be freely used under Attribution-ShareAlike license, unless stated otherwise. Cite this article:
John Lautner Facts for Kids. Kiddle Encyclopedia.