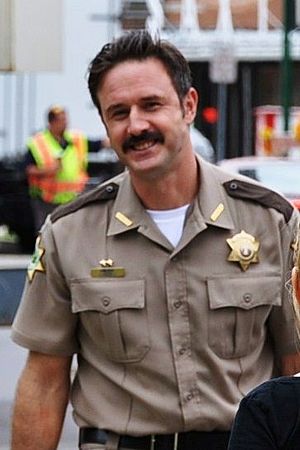 Arquette on the set of Scream 4 in July 2010. He also acted in the first three movies.

David James Arquette is an American actor, movie director, and producer. He was born in Winchester, Virginia to actor Lewis Arquette (1935-2001) and poet Mardi (née Nowak, died 1997). He is best known for his role as Deputy Sheriff Dewey Riley in the Scream movies.

Arquette played a wrestling fan in the movie Ready to Rumble. To market this movie, WCW hired Arquette to appear on their TV show and win their world title. Arquette argued he should not win the belt because he is not a real wrestler but WCW talked him into it. The attention received was only negative and the backlash eventually caused WCW to go out of business. The movie was also a critical disaster that ruined the careers of some of the actors in it, like Oliver Platt.

Because Arquette is also a wrestling fan in real life, he regretted making a mockery of wrestling and donated the money he made from WCW to families of dead wrestlers Owen Hart and Brian Pillman and also to Darren Drozdov, who was paralyzed in a wrestling match.

Arquette was a contestant on the 13th season of Dancing with the Stars in fall 2011.

All content from Kiddle encyclopedia articles (including the article images and facts) can be freely used under Attribution-ShareAlike license, unless stated otherwise. Cite this article:
David Arquette Facts for Kids. Kiddle Encyclopedia.