Sigmund and the Sea Monsters facts for kids

Sigmund and the Sea Monsters is an American children's television series that ran from September 8, 1973 to October 18, 1975, produced by Sid and Marty Krofft and aired on Saturday mornings. It was syndicated from December 1975 to June 1978 and later as part of the Krofft Superstars show from 1978 to 1985.

The show centered on two brothers named Johnny and Scott Stuart. While playing on the beach near Dead Man's Point, the two of them discover a friendly young sea monster named Sigmund who had been thrown out by his comically dysfunctional undersea family for refusing to frighten people. The boys hide Sigmund in their clubhouse. 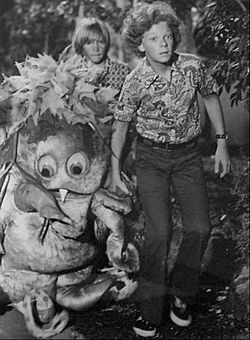 Plotlines were very simple and straightforward, usually some variation on the idea of Sigmund doing something silly to arouse attention, and the boys working to prevent him from being found by Sigmund's brothers Blurp and Slurp who want Sigmund to scare people in order to impress their parents Sweet Mama Ooze and Big Daddy Ooze. The brothers also worked to hide Sigmund from their overbearing housekeeper Zelda, elderly neighbor Mrs. Eldels, and Sheriff Chuck Bevans. Strangely, the parents were never seen on the show, nor did they return home by the end of the series.

The episodes included songs as part of the plot development. The character(s), generally Johnny, would sing a song about what he was thinking or feeling about something going on in his life, from things that made him happy to anxiety about girls.

While videotaping the first episode of Season Two, a hot light fell and started a fire. No one was injured, but the fire destroyed all of the sets and much of the costumes and other props. Most of Season Two was taped with minimal sets.

The Ooze Family are a family of sea monsters that live out at Dead Man's Point. They kicked Sigmund out after he wouldn't scare a human. Most episodes would have them trying to harm Johnny and Scott to no avail. The Ooze Family consists of:

The songs for the show were co-written by Danny Janssen, Bobby Hart and Wes Farrell.

A cover of the show's theme song, performed by Tripping Daisy, is included on the 1995 tribute album Saturday Morning: Cartoons' Greatest Hits, produced by Ralph Sall for MCA Records.

Eleven songs from the show were released on Johnny Whitaker's album Friends (Music from the Television Series 'Sigmund and the Sea Monsters') (Chelsea Records, BCL1-0332).

All songs written by Danny Janssen and Bobby Hart, except where noted.

In 2015 Sid and Marty Krofft announced that Amazon was partnering with them to create an updated version of Sigmund and the Sea Monsters. In June 2016, the pilot was released. In late 2016, it was announced that the pilot was picked up for a first season. Production for the first season occurred over the first half of 2017. A teaser trailer was released at the 2017 San Diego Comic-Con. In this version of the series, David Arquette plays Captain Barnabus who believes sea monsters are real and devotes his life to capturing them. Instead of living with a housekeeper, the boys are spending the summer at their aunt Maxine's with their cousin Robyn when they discover Sigmund. Seven episodes were released on October 13, 2017. The rest of the cast consists of Solomon Stewart as Johnny, Kyle Harrison Breitkopf as Scott, Rebecca Bloom as Robyn, Eileen O'Connell as Aunt Maxine, Johnny Whitaker as Zach, Mark Povinelli as Sigmund, Drew Massey as the voice of Sigmund, Meegan Godfrey as Blurp, Michael Oosterom as the voice of Blurp, Dan Crespin as Slurp, Victor Yerrid as the voice of Slurp, Lexi Pearl as Mama, and Donna Kimball as the voice of Mama.

All content from Kiddle encyclopedia articles (including the article images and facts) can be freely used under Attribution-ShareAlike license, unless stated otherwise. Cite this article:
Sigmund and the Sea Monsters Facts for Kids. Kiddle Encyclopedia.