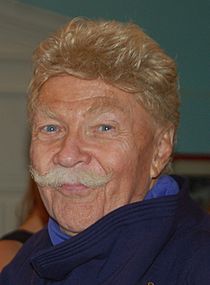 Charles Elmer "Rip" Taylor, Jr. (January 13, 1931 – October 6, 2019) was an American movie, television, stage, voice, radio actor, activist, entertainer, and comedian who was known for his roles in Indecent Proposal, Tom and Jerry: The Movie, DuckTales the Movie: Treasure of the Lost Lamp, Thing Are Tough All Over Again, Jackass, and in Alex & Emma. He also hosted a beauty pageant show The $1.98 Beauty Show from 1978 to 1980.

Taylor was born on January 13, 1934 in Washington, D.C.. He was inspired by Groucho Marx, Charlie Chaplin, Redd Foxx, and Mickey Rooney. He inspired Dana Snyder. He was openly gay. Taylor died of congestive heart failure at a hospital in Beverly Hills, California on October 6, 2019 at the age of 84. A week before his death, he had a seizure.

All content from Kiddle encyclopedia articles (including the article images and facts) can be freely used under Attribution-ShareAlike license, unless stated otherwise. Cite this article:
Rip Taylor Facts for Kids. Kiddle Encyclopedia.