Kids Encyclopedia Facts
For the character this series is based on, see Static (DC Comics). For shocks from static electricity, see Electrostatics and Triboelectric effect.

Static Shock is an American superhero animated television series based on the Milestone Media/DC Comics superhero Static. It premiered on September 23, 2000, on the WB Television Network's Kids' WB programming block. Static Shock ran for four seasons, with 52 half-hour episodes in total. The show revolves around Virgil Hawkins, an African-American boy who uses the secret identity of "Static" after exposure to a mutagen gas during a gang fight which gave him electromagnetic powers. It was the first time that an African-American superhero was the titular character of their own broadcast animation series.

The fifth series of the DC Animated Universe, the series was produced by Warner Bros. Animation from a crew composed mostly of people from the company's past shows, but also with the involvement of two of the comic's creators, Dwayne McDuffie and Denys Cowan. Static Shock had some alterations from the original comic book because it was oriented to a pre-teen audience. Nevertheless, the show approached several social issues, which was positively received by most television critics. Static Shock was nominated for numerous awards, including the Daytime Emmy. Some criticism was directed towards its jokes—which were said to be stale and too similar to the Spider-Man style—and animation, which was said to be unnatural and outdated. The series also produced some related merchandise, which sold poorly; McDuffie cited the low sales as one of the main factors behind the series' cancellation. In spite of this, its popularity revived interest in the original Milestone comic and introduced McDuffie to the animation industry.

Virgil Hawkins is a 14-year-old who lives with his older sister Sharon, and his widowed father Robert in Dakota City. He attends high school with his best friend Richie Foley, and has a crush on a girl named Frieda. He also has a dispute with a bully named Francis Stone, nicknamed "F-Stop." A gang leader named Wade recently helped Virgil, hoping to recruit him, but Virgil is hesitant, as he knows his mother died in an exchange of gunfire between gangs. Wade eventually leads Virgil to a restricted area for a fight against F-Stop's crew, but it was interrupted by police helicopters. During the dispute with the police, chemical containers explode, releasing a gas that causes mutations among the people in the vicinity (this event was later known as "The Big Bang"). As a result, Virgil obtains the ability to create, generate, absorb, and control electricity and magnetism—he takes up the alter-ego of "Static". The gas also gives others in the area their own powers, and several of them become supervillains. The mutated people become meta-humans known as "Bang Babies" and their mutations apparently spread to other people around them. 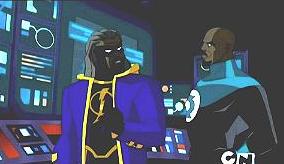 Static Shock led its characters to be incorporated in the DC animated universe. In the picture, a future Static appears in a Justice League Unlimited episode aired half a year after the ending of Static Shock.

The show's popularity led to new demand for Milestone's Static comics: the first four issues of it were reissued as Static Shock: Trial by Fire in 2000 and a miniseries, Static Shock!: Rebirth of the Cool, was released between January and September 2001. It also led to the production of an unreleased video game, toys, and books. In May 2003, Midway Games announced the production of a platform game based on the show for the Game Boy Advance. Although it was displayed at the Electronic Entertainment Expo, the game was later cancelled. For a period starting on July 4, 2004, Subway Restaurants released a series of toys based on the TV series to be offered in the United States and Canada. On September 1, 2004, Scholastic Corporation published two tie-in children's books written by Tracey West.

McDuffie's work on Static Shock placed him in the circles of animated series, and he became a writer and producer for shows like Justice League, Teen Titans, Justice League Unlimited, and Ben 10: Alien Force. McDuffie was responsible for diversifying the DC animated universe's Justice League by including black and female characters. Moreover, Arie Kaplan credits McDuffie and his co-writers for giving "a depth and complexity" the group was lacking since the 1970s. A future, older version of Virgil appeared in the Justice League Unlimited episode "The Once and Future Thing, Part 2: Time, Warped" in January 2005.

All content from Kiddle encyclopedia articles (including the article images and facts) can be freely used under Attribution-ShareAlike license, unless stated otherwise. Cite this article:
Static Shock Facts for Kids. Kiddle Encyclopedia.