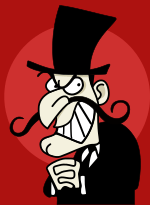 This is a stereotypical villain. Many people think about something like this when they hear or see the word "villain".

A villain is a bad person. The word comes from a Latin word meaning a feudal farm worker or peasant. Villains, or antagonists, are usually found in fiction, such as books and movies. The audience do not usually like the villain and they support the hero or heroine. However, in some cases the villain is more praised by the public than the hero, as the example of Joker in the Batman franchise. In some movies and books (such as the movie Ocean's Eleven), the villain is a good person and the hero/heroine is bad (such as a robber). When used in comic books, they are depicted as supervillains. Supervillains usually hold some kind of unnatural force.

All content from Kiddle encyclopedia articles (including the article images and facts) can be freely used under Attribution-ShareAlike license, unless stated otherwise. Cite this article:
Villain Facts for Kids. Kiddle Encyclopedia.