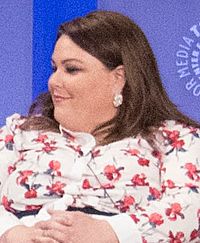 Christine Michelle Metz (born September 29, 1980) is an American singer and actress. She played Kate Pearson in the NBC television series This is Us. She won the Screen Actors Guild Award for Outstanding Performance by an Ensemble for the role.

For her acting in This is Us, Metz was also nominated for several Golden Globe and Primetime Emmy Awards.

Metz was born in Homestead, Florida.

All content from Kiddle encyclopedia articles (including the article images and facts) can be freely used under Attribution-ShareAlike license, unless stated otherwise. Cite this article:
Chrissy Metz Facts for Kids. Kiddle Encyclopedia.