Richard Joseph Neutra; April 8, 1892 – April 16, 1970) was an Austrian-American architect. Living and building for the majority of his career in Southern California, he came to be considered among the most important modernist architects.

Neutra was born in Leopoldstadt, the 2nd district of Vienna, Austria Hungary, on April 8, 1892 into a wealthy Jewish family. His Jewish-Hungarian father Samuel Neutra (1844–1920) was a proprietor of a metal foundry, and his mother, Elizabeth "Betty" Glaser Neutra (1851–1905) was a member of the IKG Wien. Richard had two brothers who also emigrated to the United States, and a sister Pepi Weixlgärtner who was an artist who emigrated to Sweden where her work can be seen at The Museum of Modern Art.

Neutra attended the Sophiengymnasium in Vienna until 1910. He studied under Max Fabiani and Karl Mayreder at the Vienna University of Technology (1910–1918), and also attended the private architecture school of Adolf Loos. In 1912 he undertook a study trip to Italy and the Balkans with Ernst Ludwig Freud (son of Sigmund Freud).

In June 1914, Neutra's studies were interrupted when he was ordered to Trebinje; he served as a lieutenant in the artillery in the Balkans until the end of the war. He took a leave in 1917 to return to the Technische Hochschule to take his final examinations.

After World War I Neutra went to Switzerland where he worked with the landscape architect Gustav Ammann. In 1921 he served briefly as city architect in the German town of Luckenwalde, and later in the same year he joined the office of Erich Mendelsohn in Berlin. Neutra contributed to the firm's competition entry for a new commercial centre for Haifa, Palestine (1922), and to the Zehlendorf housing project in Berlin (1923). He married Dione Niedermann, the daughter of an architect, in 1922. They had three sons, Frank L (1924–2008), Dion (1926–) an architect and his father's partner, and Raymond Richard (1939–) a physician and environmental epidemiologist.

Neutra moved to the United States by 1923 and became a naturalized citizen in 1929.

In 1932, Neutra was included in the seminal MoMA exhibition on modern architecture, curated by Philip Johnson and Henry-Russell Hitchcock. In 1949 Neutra formed a partnership with Robert E. Alexander that lasted until 1958, which finally gave him the opportunity to design larger commercial and institutional buildings. In 1955, the United States Department of State commissioned Neutra to design a new embassy in Karachi. Neutra's appointment was part of an ambitious program of architectural commissions to renowned architects, which included embassies by Walter Gropius in Athens, Edward Durrell Stone in New Delhi, Marcel Breuer in The Hague, Josep Lluis Sert in Baghdad, and Eero Saarinen in London. In 1965 Neutra formed a partnership with his son Dion Neutra. Between 1960 and 1970, Neutra created eight villas in Europe, four in Switzerland, three in Germany, and one in France. Prominent clients in this period included Gerd Bucerius, publisher of Die Zeit, as well as figures from commerce and science.

He was famous for the attention he gave to defining the real needs of his clients, regardless of the size of the project, in contrast to other architects eager to impose their artistic vision on a client. Neutra sometimes used detailed questionnaires to discover his client's needs, much to their surprise. His domestic architecture was a blend of art, landscape, and practical comfort.

In a 1947 article for the Los Angeles Times, "The Changing House," Neutra emphasizes the "ready-for-anything" plan – stressing an open, multifunctional plan for living spaces that are flexible, adaptable and easily modified for any type of life or event.

The novelist/philosopher Ayn Rand was the second owner of the Von Sternberg House in the San Fernando Valley (now destroyed). A photo of Neutra and Rand at the home was famously captured by Julius Shulman.

Neutra's early watercolors and drawings, most of them of places he traveled (particularly his trips to the Balkans in WWI) and portrait sketches, showed influence from artists such as Gustav Klimt, Egon Schiele etc. Neutra's sister Josefine, who could draw, is cited as developing Neutra's inclination towards drawing.

Neutra's son Dion has kept the Silver Lake offices designed and built by his father open as "Richard and Dion Neutra Architecture" in Los Angeles. The Neutra Office Building is listed on the National Register of Historic Places.

In 1980, Neutra's widow donated the Van der Leeuw House (VDL Research House), then valued at $207,500, to California State Polytechnic University, Pomona (Cal Poly Pomona) to be used by the university's College of Environmental Design faculty and students. In 2011, the Neutra-designed Kronish House (1954) on 9439 Sunset Boulevard in Beverly Hills sold for $12.8 million.

In 2009, the exhibition "Richard Neutra, Architect: Sketches and Drawings" at the Los Angeles Central Library featured a selection of Neutra's travel sketches, figure drawings and building renderings. An exhibition on the architect's work in Europe between 1960 and 1979 was mounted by the MARTa Herford, Germany.

The revival in the late 1990s of mid-century modernism has given new cachet to his work, as with homes and public structures built by the architects John Lautner and Rudolf Schindler. The Kaufmann Desert House was restored by Marmol Radziner + Associates in the mid-1990s.

The typeface family Neutraface, designed by Christian Schwartz for House Industries, was based on Richard Neutra's architecture and design principles.

In 1977, he was posthumously awarded the AIA Gold Medal, and in 2015 he was honored with a Golden Palm Star on the Walk of Stars in Palm Springs, California.

The 1962 Maslon House of Rancho Mirage, California was demolished in 2002.

Neutra's Cyclorama Building at Gettysburg was demolished by National Park Service between March 8–9, 2013. 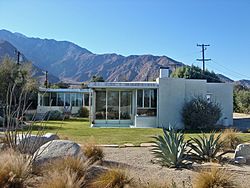 All content from Kiddle encyclopedia articles (including the article images and facts) can be freely used under Attribution-ShareAlike license, unless stated otherwise. Cite this article:
Richard Neutra Facts for Kids. Kiddle Encyclopedia.