Playa del Rey is a coastal neighborhood and a district of City of Los Angeles. The rolling hills are the result of ancient, wind-blown, compacted sand dunes which rise up to 125 feet (38 m) above sea level, originally called and often referred to as The Del Rey Hills or "The Bluffs". These dunes run parallel to the coastline, from Playa del Rey, all the way south to Palos Verdes.

The community is bordered by the Pacific Ocean to the west, Marina del Rey and Ballona Creek to the north, Ballona Wetlands and Playa Vista to the northeast, Westchester to the east, Los Angeles International Airport and El Segundo to the south.

The northern part was originally wetlands, but the natural flooding was halted by the concrete channel which contains Ballona Creek.

In the 1870s, Playa Del Rey was the location of the first attempt at a dredged harbor in Santa Monica Bay. Under contract with the Atchison, Topeka & Santa Fe Railroad, Moye Wicks' syndicate spent $300,000 to dredge "Port Ballona Harbor", for shipping to the Orient. Within three years, winter waves brought flooding, but what remained of man's early efforts became the Playa Del Rey Lagoon, now a regional public park.

Palisades del Rey (also, Palisades Del Rey) was the name of the original 1921 neighborhood land development by Dickinson & Gillespie Co. that later came to be called Playa del Rey. The company advertised this area of sand dunes as the last stretch of coastal land in the city of Los Angeles to be developed. All of the houses in this area were custom built, many as beach homes owned by Hollywood actors and producers, including Cecil B. Demille, Charles Bickford, and others.

Construction in Playa del Rey surged in 1928 with the development of the Del Rey Hills neighborhood in the Eastern part of the community (to the East of Pershing Drive), and the move of Loyola University (now Loyola Marymount University) to the adjacent community of Westchester.

The southern portion of the original Playa del Rey development, which came to be known as "Surfridge," is now vacant. Between 1966 and 1975 the houses that were once there were either moved or demolished to facilitate the expansion of Los Angeles International Airport (LAX) and to address concerns about the noise of increasing jet plane traffic. The noise from the flights made it less desirable to live on the dunes above the ocean under the LAX flight path. The City of Los Angeles condemned the southern section of Playa del Rey under the power of eminent domain, and purchased all of the homes. Today one can see only barbed-wire fences protecting vacant land and old streets where houses once sat. Recent LAX rejuvenation plans call for the city to finally remove the old streets that still line the empty neighborhood. The condemned areas of the community are now a protected habitat of the endangered El Segundo blue butterfly.

Playa del Rey in the 1950s and early 1960s was known as a great Los Angeles area "surfing spot", but due to the many rock jetties that were built to prevent beach erosion, the good surf is mostly gone. The beach at the northernmost end of Playa del Rey is still known as "Toes Over Beach", "Toes Beach" or just "Toes" by the local surfing community, a name derived from the toes over or Hang Ten surfing maneuver. Most surfers now flock south of Dockweiler Beach, to "El Porto", the northernmost part of beach in the city of Manhattan Beach. The lifeguard and park services are uniform across the entire twenty-mile stretch of beach.

One danger for beachgoers is the uncontrolled water runoff from the creek, and the occasional overflow from the giant Hyperion treatment plant to the south.

Locals refer to the small area of housing south of Culver Boulevard and closest to the beach as The Jungle, a nickname given to a group of closely built apartments built in 1956, bounded by Trolley Place and Trolleyway Street on its east and west respectively, and including the streets Fowling, Rees, Sunridge and Surf. The small sidewalks between homes had/have deep green overgrowth, which added to the name.

Today a bridge between Playa Del Rey and the jetty between Ballona Creek and the Marina is accessible to foot traffic and bicycle traffic, but not to automobiles. Bikers, skaters and joggers probably have the best chance of traversing the sidewalks of the beaches north to Santa Monica, and to the South Bay, here at this bridge. Both UCLA and LMU have crew teams that practice on the Ballona Creek channel and Marina del Rey. 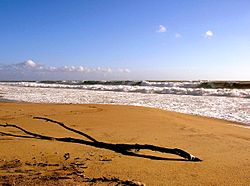 Overlooking the entrance to the marina and Ballona Creek, with the tightly packed area known as The Jungle in the foreground. 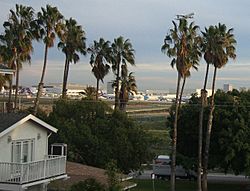 The community's proximity to LAX has made airport expansion a controversial issue to residents.

94.73% of employed Playa Del Rey residents work in a white collar profession. 65.56% of all residents 25 years of age or older have at least a bachelor's degree, and 39.75% of residents have obtained a graduate level education or more. As of 2021, the median price for a single family home in the 90293 zip code has exceeded $3 million, and the average income is $148,296, which is among the wealthiest in Los Angeles.

As Playa del Rey is located in the heart of the Silicon Beach, the economy has become largely driven by the tech sector. The neighborhood is also home to a large number of airline and aerospace employees owing to its proximity to LAX. The vast majority of land in Playa del Rey is zoned for residential purposes only. It is known for its large ocean-view estates, but the bulk of the population lives in the eastern portion, which is densely developed with apartment and condominium complexes. Only portions of Manchester Avenue, Pershing Drive and Culver Boulevard have businesses—mainly restaurants and a pharmacy—and offices mixed in with residential buildings.

Playa del Rey is within the Los Angeles Unified School District. The area is within Board District 4. As of 2009 Steve Zimmer represents the district.

Notable schools in the area include Westchester Enriched Sciences Magnets (6–8) and St. Bernard High School is a private Roman Catholic school in the area.

As of 2014, the Wiseburn School District allows parents in Playa del Rey to send their children to Wiseburn schools on inter-district transfers.

All content from Kiddle encyclopedia articles (including the article images and facts) can be freely used under Attribution-ShareAlike license, unless stated otherwise. Cite this article:
Playa del Rey, Los Angeles Facts for Kids. Kiddle Encyclopedia.