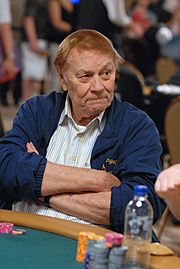 Gerald Hatten "Jerry" Buss (January 27, 1933 – February 18, 2013) was an American businessman, poker player, real estate investor, and chemist. Buss was the owner of the basketball team the Los Angeles Lakers from 1979 until his death in 2013.

Buss was born on January 27, 1933 in Salt Lake City, Utah. He studied at the University of Wyoming and at the University of Southern California. Buss was married to JoAnn Mueller until they divorced. They had four children. Then he was married to Karen Buss until his death in 2013. They had two children. Buss died on February 18, 2013 from cancer and kidney failure in Los Angeles, California, aged 80.

All content from Kiddle encyclopedia articles (including the article images and facts) can be freely used under Attribution-ShareAlike license, unless stated otherwise. Cite this article:
Jerry Buss Facts for Kids. Kiddle Encyclopedia.