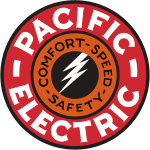 The Pacific Electric Railway Company was a private transportation system in Los Angeles, California. It started when Henry E. Huntington began building and buying streetcar railroads in and around Los Angeles to help people reach his properties. 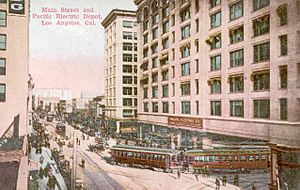 Most of its lines carried people but there was also some freight. Pacific Electric also owned a mountain tourist attraction called the Mount Lowe Railway.

In the 1920s, with hundreds of miles of track, it was the largest system in the world. While Huntington lost money running Pacific Electric, he made money by selling the land it reached.

After Henry Huntington died and the land was all sold, the system started to break down and there was no money coming in to repair it. The city of Los Angeles decided it would be cheaper to move passengers with buses and close the whole system.

And so the last Pacific Electric train ran in 1961. The tracks were all ripped up and all of the old trains were either destroyed or sold to other countries. 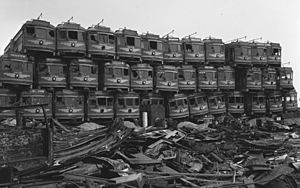 Almost thirty years after the last train, with traffic becoming worse and buses becoming slower, the city remembered the old system. They decided to start rebuilding it because they realized trains do not slow down when there is a traffic jam.

Today, a small part of the old Pacific Electric rail network is now part of the new and growing Los Angeles Metro and people are riding trains again. 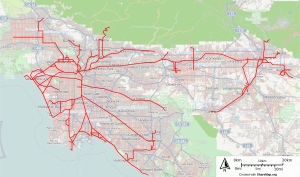 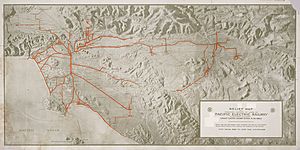 The Pacific Electric ran lines from Los Angeles to the following cities:

All content from Kiddle encyclopedia articles (including the article images and facts) can be freely used under Attribution-ShareAlike license, unless stated otherwise. Cite this article:
Pacific Electric Railway Facts for Kids. Kiddle Encyclopedia.