Seal Beach is located in the westernmost corner of Orange County. To the northwest, just across the border with Los Angeles County, lies the city of Long Beach and the adjacent San Pedro Bay. To the southeast are Huntington Harbour, a neighborhood of Huntington Beach, and Sunset Beach, also part of Huntington Beach. To the east lie the city of Westminster and the neighborhood of West Garden Grove, part of the city of Garden Grove. To the north lie the unincorporated community of Rossmoor and the city of Los Alamitos. A majority of the city's acreage is devoted to the Naval Weapons Station Seal Beach military base.

Early on, the area that is now Seal Beach was known as "Anaheim Landing", as the boat landing and seaside recreation area named after the nearby town of Anaheim. The site of Anaheim Landing is now registered as a California Historical Landmark.

By the 20th century, it was known as Bay City, but there was already a Bay City located in Northern California. When the time of incorporation on October 27, 1915, the town was named Seal Beach. The town became a popular recreation destination in the area. The Joy Zone, a beach-side amusement park built in 1916, was the first in Orange County.

The United States Navy's Naval Weapons Station Seal Beach was originally constructed during World War II for loading, unloading, and storing of ammunition for the Pacific Fleet, and especially those US Navy warships home-ported in Long Beach and San Diego, California. With closure of the Concord Naval Weapons Station in Northern California, it has become the primary source of munitions for a majority of the U.S. Pacific Fleet. 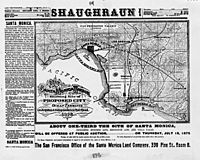 The Lions Club Pancake Breakfast in April and its Fish Fry (started in 1943) in July are two of the biggest events in Seal Beach. There has been a Rough Water Swim the same weekend as the Fish Fry since the 1960s. The Seal Beach Chamber of Commerce sponsors many events, including: a Classic Car Show in April, a Summer Concert series in July and August, the Christmas Parade in December along with Santa and the Reindeer. Also in the fall is the Kite Festival in September.

The record label Mash Down Babylon Records is based in Seal Beach, operated out of a garage known as The Elizabethan. The label was founded by Matt Embree, lead vocalist and guitarist in the Seal Beach-based progressive rock/post-hardcore band RX Bandits.

On Electric Avenue where the railroad tracks used to run, there is the Red Car Museum which features a restored Pacific Electric Railway Red Car. The Red Car trolley tracks once passed through Seal Beach going south to the Balboa Peninsula in Newport Beach. Going north into Long Beach a rider could then take the Red Cars through much of Los Angeles County.

Seal Beach is also home to the Bay Theatre, which was a popular venue for independent film and revival screenings. It was closed in 2012 and is seeking funds to reopen.

The Seal Beach National Wildlife Refuge is located on part of the Naval Weapons Station Seal Beach. Much of the refuge's 911 acres (3.69 km2) is the remnant of the saltwater marsh in the Anaheim Bay estuary (the rest of the marsh became the bayside community of Huntington Harbour, which is part of Huntington Beach). Three endangered species, the Ridgway's light-footed rail, the California least tern, and the Belding's Savannah sparrow, can be found nesting in the refuge. With the loss and degradation of coastal wetlands in California, the remaining habitat, including the Bolsa Chica Ecological Reserve in Huntington Beach and Upper Newport Bay in Newport Beach, has become much more important for migrating and wintering shorebirds, waterfowl, and seabirds. Although the refuge is a great place for birdwatching, because it is part of the weapons station, access is limited and usually restricted to once-a-month tours. 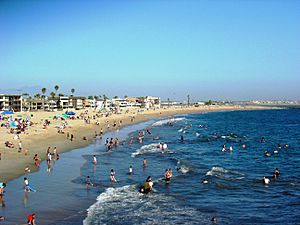 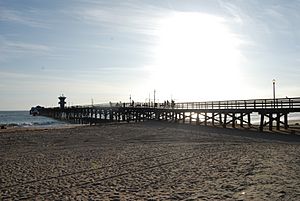 The second longest wooden pier in California (the longest is in Oceanside) is located in Seal Beach and is used for fishing and sightseeing. The pier has periodically suffered severe damage due to storms and other mishaps, requiring extensive reconstruction. A plaque at the pier's entrance memorializes Federal Emergency Administration of Public Works, 1938, Project No. Calif. 1723-F, a rebuilding necessitated by storms in 1935. Another plaque honors the individuals, businesses, and groups who helped rebuild the pier after a storm on March 2, 1983, tore away several sections. Most prominent was a "Save the Pier" group formed in response to an initial vote by the City Council not to repair the pier. The ensuing outcry of dismay among residents caused the City Council to reverse its stance while claiming the city lacked the necessary funds. Residents mobilized and eventually raised $2.3 million from private and public donors to rebuild the pier.

Surfing locations in Seal Beach include the Seal Beach pier and the river-"Stingray Bay" (or Ray Bay—the surfer's nickname for the mouth of the San Gabriel River—the stingrays are attracted by the heated water from several upstream powerplants). Classic longboard builders in the area include Harbour Surfboards, established in 1959, in Seal Beach. 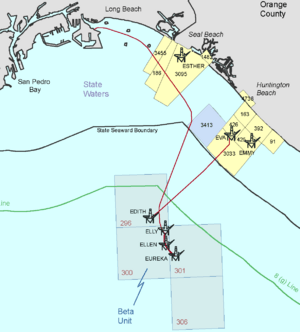 The major employer in Seal Beach is Boeing, employing roughly 1,000 people. Its facility was originally built to manufacture the second stage of the Saturn V rocket for NASA's Apollo manned space flight missions to the Moon and for the Skylab program. Boeing Homeland Security & Services (airport security, etc.) is based in Seal Beach and Boeing Space & Intelligence Systems (satellite systems and classified programs) is headquartered in Seal Beach.

All content from Kiddle encyclopedia articles (including the article images and facts) can be freely used under Attribution-ShareAlike license, unless stated otherwise. Cite this article:
Seal Beach, California Facts for Kids. Kiddle Encyclopedia.