The refuge is a collaboration between the United States Fish and Wildlife Service and the Department of the Navy. It serves as a critical habitat and winter stopover for many birds along the Pacific Flyway. Among the birds found at the refuge are great blue herons and the three endangered bird species: California clapper rail, California least tern, and Belding's Savannah sparrow.

The subtidal zone is the shallow, near-shore area below the intertidal zone, the land between the high and low tide marks. Subtidal is permanently inundated, except for rare lowest low tide events. There are four tidal basins created for the restoration of wetland: Forrestal Pond, Case Road Pond, 7th Street Pond, and Perimeter Pond, which are currently supporting the subtidal habitat in the Refuge. Tidal water from Anaheim Bay supports the ponds.

Dominating plants in these subtidal habitat is eelgrass, and mudflat portions in the habitat is supporting many invertebrate species.

The complex system of tidal channels delivers moisture and nourishment (oxygen and nutrients) throughout the habitat and providing food or pathway to food for fish and other organisms.

The soil of intertidal flats is a combination of clay, silt, sand, shells, and organic matter, with algae as dominant plants.

Mudflats contain organisms which are a major food source for worms and invertebrates. Fishes, sharks and rays would often come to the mudflats with the tides and feed on transient or permanent residing fish. Shorebirds also depend on preying invertebrates on the mudflats.

Coastal salt marsh habitat, situated above mudflats, contains salt tolerant vegetation. It is the predominant habitat in the refuge with 565-acre land occupied. It is a nesting, feeding and cover area for bird and fish including the endangered light-footed clapper rails and Belding's Savannah sparrow.

A study on light-footed clapper rail was conducted since 1979. One of the study area is in the salt marsh in Anaheim Bay, the coastal salt marsh located in the Seal Beach National Wildlife Refuge. The environment of salt marsh was described: "The surrounding land lands are flat or gently sloping and provide little drainage into the bay. Consequently there are very little fresh water input other than winter rains… Most of the vegetation is characteristic of the low and middle littoral zones and is completely inundated by a 1.8 m tide (Mean Lower Low Water)." A list of major plants in the marsh was also provided: cordgrass (dominant plants at lower elevation), pickleweed and saltwort (dominant in middle elevation), seablite, saltgrass, sea lavender, arrowgrass, Jaumea carnosa, and Frankenia grandiflora. The dominating plants in the upper zone are glasswort and pickleweed. In the highest elevation (which sometimes is referred to as wetland/upland transition), there are no remaining native species.

41 acres within 65 acres of the uplands areas were built into roads, railroad tracks or others manmade structures. Most of these areas were originally wetland but were replaced for agricultural or military practices in the 19th century.

Situated in the southern part of the Refuge, Hog Island was the only place that supported native vegetation, although none of it has been left for today. There are three "arms" stretching out of the land (military used in the past) planted with native vegetation today to support and shelter upland birds, especially during high tides.

The island is completely manmade, built in the 1960s for rocket testing until 1977. It is leveled today and covered with sand to provide a nesting site for the least tern. 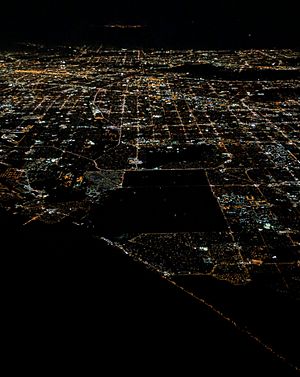 Night aerial view of Seal Beach, California, and vicinity, from the south. The large dark rectangle is the Naval Weapons Station Seal Beach, and the dark blob that extends it to the coast is the Seal Beach National Wildlife Refuge. In the lower right, the dark area separated from the ocean by the lighted California Highway 1 is the Bolsa Chica Ecological Reserve in Huntington Beach.

In 1944, the Department of the Navy acquired about 5,000 acres of land in and around Anaheim Bay from the Alamitos Land Company. Although the Navy purchased the land, the California State Lands Commission held all of the submerged lands within the station. In May 1954, the Service contacted the Navy, regarding a potential hunting program on their land; however, the Navy rejected permission. Between 1954 and 1956, the Service made several additional proposals to the Navy for managing its lands including raising food crops to support waterfowl. In 1963, Congressman Richard Hanna told the Service he was interested in establishing a Refuge between Huntington Beach and Seal Beach. This cooperative plan for 600 acres of tidal marsh on Naval Weapons Station Seal Beach (NWSSB) was approved in 1964 through a three-way agreement among the Navy, the Service, and the California Department of Fish and Game. In 1971, there was a new discussion about establishing a Refuge at this location. This ultimately triggered political intervention by U.S. Congressman Craig Hosmer and California State Senator Dennis Carpenter. Through the efforts of Congressman Hosmer, President Nixon signed Public Law 92-408 in August 1972, authorizing the establishment of a National Wildlife Refuge on the NWSSB. The Refuge was officially established on July 11, 1974 when the Notice of the Establishment, which included the specific boundaries of the Refuge, was published in the Federal Register.

In 1995, there was a study that U.S Navy has found elevated levels of toxic chemicals in the carcasses and food of endangered birds at the Seal Beach National Wildlife Refuge. The elevated levels of cadmium, chromium, copper, lead, nickel and zinc, all poisonous heavy metals, were found in dead California least terns and light-footed clapper rails. However, these potentially toxic substances were not only found in the birds, but also found in smaller animals normally eaten by them. They also found small amounts of PCBs and DDT, a dangerous pesticide that was banned by the Endangered Species Act in 1973. To find the cause, the Navy assessed the impacts of ponds on the refuge on the birds. They found that there was a construction of the pond by the Port of Long Beach that has raised the volume and velocity of the bay water flowing into the refuge. The toxic materials affect the birds with altered growth patterns, reduced survival, loss of appetite, lethargy, difficulty in reproducing, and even killing the birds.

Study of the endangered light-footed clapper rail was conducted in 1979. This study mainly focuses on the three remaining largest populations in Anaheim Bay, Upper Newport Bay and Tijuana Marsh in San Diego county.

Study of the California least tern nesting season was conducted in 1980. This study mainly focuses on previously color-banded least tern chicks nesting behavior in the Seal Beach National Wildlife Refuge. A least tern nesting site was prepared in the refuge in 1978 for the study.

All content from Kiddle encyclopedia articles (including the article images and facts) can be freely used under Attribution-ShareAlike license, unless stated otherwise. Cite this article:
Seal Beach National Wildlife Refuge Facts for Kids. Kiddle Encyclopedia.