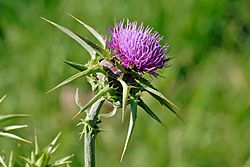 Thistle is a group of flowering plants which have sharp prickles on around the flower and are in the Asteraceae family. The prickles often all over the plant – on the stem and flat parts of leaves. This protects the plant against herbivorous animals, stopping them from eating the plant.

The term thistle is sometimes taken to mean exactly those plants in the group Cynareae (synonym: Cardueae), especially the genera Carduus, Cirsium, and Onopordum. However, plants outside this group are sometimes called thistles, and if this is done thistles would form a polyphyletic group.

Thistle is the floral emblem of Scotland.

Genera in the Asteraceae with the word thistle often used in their common names include:

Plants in families other than Asteraceae which are sometimes called thistle include: 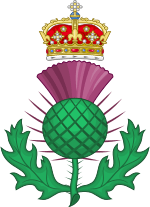 Scottish thistle as a Heraldic badge.

The thistle has been the national emblem of Scotland since the reign of Alexander III (1249–1286) and was used on silver coins issued by James III in 1470. It is the symbol of the Order of the Thistle, a high chivalric order of Scotland. It is found in many Scottish symbols and as the name of several Scottish football clubs. The thistle, crowned with the Scottish crown, is the symbol of seven of the eight Scottish Police Forces (the exception being the Northern Constabulary). The thistle is also the emblem of Encyclopædia Britannica, which originated in Edinburgh, Scotland. Carnegie Mellon University features the thistle in its crest.

Origin as a symbol of Scotland

According to a legend, an invading Norse army was attempting to sneak up at night upon a Scottish army's encampment. During this operation one barefoot Norseman had the misfortune to step upon a thistle, causing him to cry out in pain, thus alerting Scots to the presence of the Norse invaders. Some sources suggest the specific occasion was the Battle of Largs, which marked the beginning of the departure of King Haakon IV (Haakon the Elder) of Norway who, having control of the Northern Isles and Hebrides, had harried the coast of the Kingdom of Scotland for some years. Which species of thistle is referred to in the original legend is disputed. Popular modern usage favours Cotton Thistle Onopordum acanthium, perhaps because of its more imposing appearance, though it is unlikely to have occurred in Scotland in mediaeval times; the Spear Thistle Cirsium vulgare, an abundant native species in Scotland, is a more likely candidate. Other species, including Dwarf Thistle Cirsium acaule, Musk Thistle Carduus nutans, and Melancholy Thistle Cirsium heterophyllum have also been suggested.

Maud Grieve recorded that Pliny and medieval writers had thought it could return hair to bald heads and that in the early modern period it had been believed to be a remedy for headaches, plague, canker, sores, vertigo, and jaundice.

All content from Kiddle encyclopedia articles (including the article images and facts) can be freely used under Attribution-ShareAlike license, unless stated otherwise. Cite this article:
Thistle Facts for Kids. Kiddle Encyclopedia.