Carduus nutans, with the common names musk thistle, nodding thistle, and nodding plumeless thistle, is a biennial herb in the Asteraceae—sunflower family. It is native to regions of Europe and Asia.

Carduus nutans is a native plant of Eurasia. It is an introduced species, and often a noxious weed, in other regions and on other continents.

The plant grows from sea level to an elevation of about 2,500 metres (8,200 ft). It is found in neutral to acidic soils. It typically grows in meadows and grasslands, in heavily grazed land in areas such as pastures, and on open disturbed soil such as roadsides and building sites. It spreads rapidly in areas subjected to frequent natural disturbance events such as landslides and flooding, but does not grow well in excessively wet, dry, or shady conditions.

Carduus nutans is usually a biennial, requiring 2 years to complete a reproductive cycle. However, it may germinate and flower in a single year in warmer climates. Seedlings may emerge at any time from spring to late summer and develop a rosette. Plants overwinter in the rosette stage, sending up a multi-branched flowering stem in mid spring of their second year.

Mature plants range in height from 1–1.5 metres (3.3–4.9 ft) tall and have multi-branched stems. Musk thistle has sharply spiny stems and leaves. The stem is cottony/hairy. The plants develop a rosette, with large leaves 30–60 centimetres (12–24 in) long.

The leaves are dark green, coarsely bipinnately lobed, with a smooth, waxy surface and sharp yellow-brown to whitish spines at the tips of the lobes. They are more or less hairy on top, and wooly on the veins below. 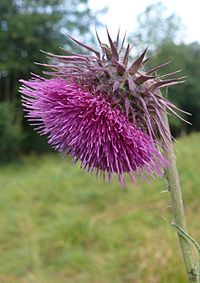 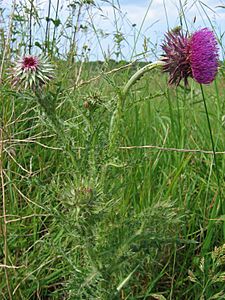 The plant bears showy red-purple flowers. The large globose flower heads, containing hundreds of tiny individual flowers, are 3–5 cm (rarely to 7 cm) diameter and occur at the tips of stems. The flower heads commonly droop to a 90° to 120° angle from the stem when mature, hence its alternate name of "Nodding thistle". Each plant may produce thousands of straw-colored seeds adorned with plume-like bristles. They are 4 to 6 cm across, with purple-red bracts.

The number of flowerheads per plant is site-dependent and ranges from about 20-50 on good sites and 1-20 on poor sites. Flowering occurs from late spring to late summer, and seed dissemination occurs approximately one month after the flowers form. A single flower head may produce 1,200 seeds and a single plant up to 120,000 seeds, which are wind dispersed. The seeds may remain viable in the soil for over ten years, making it a difficult plant to control.

Carduus nutans is an invasive species in various regions around the world, including in disturbed and agricultural settings, and in natural habitats.

Musk thistle was introduced into the eastern North America in the early 19th century, and has been an invasive species there since. It is declared a noxious weed in many U.S. states, Canadian provinces, South Africa, New Zealand, and Australia. Previous populations in Southern California were eradicated, but it remains in northern California.

All content from Kiddle encyclopedia articles (including the article images and facts) can be freely used under Attribution-ShareAlike license, unless stated otherwise. Cite this article:
Carduus nutans Facts for Kids. Kiddle Encyclopedia.