Sonchus is a genus of flowering plants in the dandelion tribe within the sunflower family Asteraceae and are commonly known as sow thistles (less commonly hare thistles or hare lettuces). Sowthistles are annual, biennial or perennial herbs, with or without rhizomes and a few are even woody (subgenus Dendrosonchus, restricted to the Canary Islands). 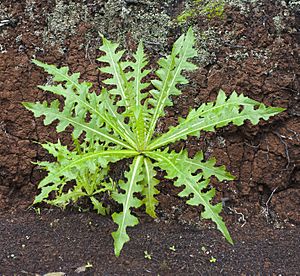 Sonchus hierrensis in the Canary Island of La Gomera.

The genus is named after the Ancient Greek for such plants. All are characterized by soft, somewhat irregularly lobed leaves that clasp the stem and, at least initially, form a basal rosette. The stem contains a milky latex. Flower heads are yellow and range in size from half to one inch in diameter; the florets are all of ray type. Sonchus fruits are single-seeded, dry and indehiscent. Sow thistles are common roadside plants, and while native to Eurasia and tropical Africa, they are found almost worldwide in temperate regions.

Mature sow thistle stems can range from 30 cm to 2 m (1 to 6 ft) tall, depending upon species and growing conditions. Coloration ranges from green to purple in older plants. Sow thistles exude a milky latex when any part of the plant is cut or damaged, and it is from this fact that the plants obtained the common name, "sow thistle", as they were fed to lactating sows in the belief that milk production would increase. Sow thistles are known as "milk thistles" in some regions, although true milk thistles belong to the genus Silybum.

In many areas sow thistles are considered noxious weeds, as they grow quickly in a wide range of conditions and their wind-borne seeds allow them to spread rapidly. Sonchus arvensis, the perennial sow thistle, is considered the most economically detrimental, as it can crowd commercial crops, is a heavy consumer of nitrogen in soils, may deplete soil water of land left to fallow, and can regrow and sprout additional plants from its creeping roots. However, sow thistles are easily uprooted by hand, and their soft stems present little resistance to slashing or mowing.

Most livestock will readily devour sow thistle in preference to grass, and this lettuce-relative is edible and nutritious to humans—in fact this is the meaning of the second part of the Latin name of the common sow thistle, oleraceus. Attempts at weed control by herbicidal use, to the neglect of other methods, may have led to a proliferation of these species in some environments.

Sow thistles are common host plants for aphids. Gardeners may consider this a benefit or a curse; aphids may spread from sow thistle to other plants, but alternatively the sow thistle can encourage the growth of beneficial predators such as hoverflies. In this regard sow thistles make excellent sacrificial plants. Sonchus species are used as food plants by the larvae of some Lepidoptera including Celypha rufana and the broad-barred white, grey chi, nutmeg, and shark moths . The fly Tephritis formosa is known to attack the capitula of this plant. 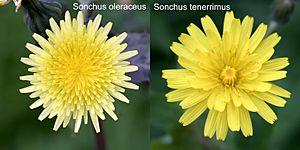 Sonchus tenerrimus and Sonchus oleraceus infest many crops in Italy, especially in the Southern area of the peninsula. They are considered good tasting edible plants and are cooked with spaghetti and meatballs.

Sow thistles have been used as fodder, particularly for rabbits, hence the other common names of "hare thistle" or "hare lettuce". They are also edible to humans as a leaf vegetable; old leaves and stalks can be bitter but young leaves have a flavour similar to lettuce. Going by the name puha or rareke (raraki) it is frequently eaten in New Zealand as a vegetable, particularly by the native Māori. When cooked the flavour is reminiscent of chard

All content from Kiddle encyclopedia articles (including the article images and facts) can be freely used under Attribution-ShareAlike license, unless stated otherwise. Cite this article:
Sonchus Facts for Kids. Kiddle Encyclopedia.