Gardena is a city located in the South Bay region of Los Angeles County, California, United States. The population was 58,829 at the 2010 census, up from 57,746 at the 2000 census. Until 2014, the US census cited the City of Gardena as the place with the highest percentage of Japanese Americans in California. Gardena's Japanese American population contributes to the South Bay region of Los Angeles being home to the largest concentration of Japanese companies within the mainland United States.

Based on archaeological findings, the Tongva people hunted and fished in the area of today's Gardena. The Tongva Indians — also known as Gabrielino Indians — are probably descendants of those who crossed from Asia to North America around 10,000 years ago.

In 1784, three years after the foundation of Los Angeles, Juan Jose Dominguez (1736–1809), a Spanish soldier who arrived in San Diego, California in 1769 with Fernando Rivera y Moncada, in recognition of his military service, received the roughly 43,000-acre (170 km2) Spanish land grant, the Rancho San Pedro. Part of this land contained what became known as Gardena Valley. After the American Civil War veterans bought parts of the land, and soon ranchers and farmers followed suit. Union Army Major General William Starke Rosecrans in 1869 bought 16,000 acres (65 km2). The "Rosecrans Rancho" was bordered by what later was Florence Avenue on the north, Redondo Beach Boulevard on the south, Central Avenue on the east, and Arlington Avenue on the west. The Rosecrans property was subdivided and sold in the early 1870s. One of those became the 650-acre (2.6 km2) Amestoy Ranch. Gardena proper began in 1887 when the Pomeroy & Harrison real estate developers subdivided the ranch, anticipating the coming of the Los Angeles and Redondo Railway. Civil War veteran Spencer Roane Thorpe is credited with starting the first settlement in Gardena in 1887. Railroads put Gardena on the map following a real estate boom in the Los Angeles area in the 1880s.

Some believe the city was named for its reputation for being the only "green spot" in the dry season between Los Angeles and the sea. Because of its acres of berries, the city was dubbed "Berryland". The Strawberry Day Festival and Parade was held each May. The berry industry suffered at the time of World War I as other crops were supported by the war economy.

Japanese Americans settled in Gardena throughout its history. Their community was the subject of a 60 Minutes report in 1970.

The only way Gardena could protect itself from a heavy county tax imposed on a planned project at a park site was to incorporate. The City of Gardena became incorporated on September 11, 1930.

From 1936 to 1980, Gardena held a local monopoly on legal cardrooms, the taxes from which accounted for nearly a third of its annual budget.

According to the United States Census Bureau, the city has a total area of 5.9 square miles (15 km2), over 99% of which is land. A 9.4-acre wetland preserve, the Gardena Willows Wetland Preserve, is located at the southeast corner of Gardena. This is a naturally-occurring marshland where water seeps above-ground all year round. It hosts several species of trees and other vegetation. It is located near the intersection of Vermont Avenue and Artesia Boulevard.

Gardena is bordered by Athens on the north, the Los Angeles neighborhood of Harbor Gateway on the east and south, Torrance on the southwest, Alondra Park on the west, and Hawthorne on the northwest.

In 1980, about 31% of the population was Anglo white, 23% was black, 21% was Japanese, and 17% was Latino. The remainder included a Korean community that was increasing in size and Chinese, Filipino, and Native American people. The National Planning Data Corp. released projected figures in 1987 estimating that of the 50,000 residents, 26.3% were Anglo, 23% were black, 22.7 were Latino, and 28% were of other racial groups. By 1989, Anglo and Japanese residents tended to live in central and southern Gardena. Middle class black people began to move into the Hollypark area in northern Gardena in the 1960s, so the black population was concentrated there.

According to the 1970 U.S. Census, 56% of the population was White. Racial demographic changes occurred until 1978. That year, Mayor Edmond J. Russ declared that, according to a special 1978 census, the racial demographics of Gardena had stabilized.

Gardena has a large Japanese-American community. Until 2014, it had the second-highest concentration of Japanese Americans in any U.S. municipality, the first being Honolulu. As of 2014, the nearby city of Torrance holds the highest Japanese-American population in the 48 contiguous states.

The Japanese Cultural Institute (JCI) has been is located in Gardena since 1988, and offers cultural and social activities for Japanese Americans. The building used during that year was completed in 1976.

In 1942 the U.S. military moved the Japanese in Gardena to internment camps.

In 1966, for the first time, a Nisei, Kiyoto Ken Nakaoka, was seated on the city council. In 1980, the city was 21% Japanese, and as of 1989[update], Japanese residents tended to live in the center and south of the city.

See also: History of the Korean Americans in Los Angeles

National Stores Inc., which operates the Factory 2-U and the Fallas Paredes brands, has its headquarters in the Harbor Gateway area of Los Angeles, near Gardena.

According to the city's 2012 Comprehensive Annual Financial Report, the top employers in the city are:

The Gardena Office of Economic Development is a department of the city government. It aids employers in filling a variety of jobs customized to their specific needs. It also helps potential employers in setting up business enterprises.

The Gardena Police Department is the primary law enforcement agency in the city. The department has 93 sworn police officers, 24 full-time support staff, and 33 part-time employees. There are reserve, volunteer, and explorer programs. The current Chief of Police is Edward Medrano, appointed in 2007. Radio communications and the 9-1-1 call center are handled by the South Bay Regional Public Communications Authority.

Wednesday Progressive Club sponsored the formation of the Gardena Library. In 1913 the Moneta Branch was formed. In 1914 the Gardena Library became a part of the Los Angeles County Free Library system. Due to annexation the library was transferred to the Los Angeles City Library Board. In 1919 the Strawberry Park branch was formed. In August 1951 the Gardena library came back to the county system. In 1958 the Strawberry Park and Moneta branches merged into the West Gardena Branch. The current Gardena library building was dedicated on December 5, 1964. In 1969 a fire forced the West Gardena branch to go to a new location. The current Satow building, dedicated on February 26, 1977, was named after a Japanese American in the community. The Gardena library received its current name on May 30, 1992, and was named after a library volunteer, who had died prior to the renaming. 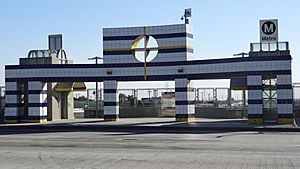 The National Transportation Safety Board operates the Gardena Aviation Field Office in Harbor Gateway, Los Angeles; it is the regional headquarters of the NTSB Aviation Western Region.

All content from Kiddle encyclopedia articles (including the article images and facts) can be freely used under Attribution-ShareAlike license, unless stated otherwise. Cite this article:
Gardena, California Facts for Kids. Kiddle Encyclopedia.