The Harbor Gateway is a 5.14-square-mile, shoelace-shaped north-south residential and industrial neighborhood in the Los Angeles, California, Harbor Region, in the southern part of the city. It is highly diverse ethnically, and has experienced a measure of hostilities between blacks and Latinos, and a gang injunction has been enforced against Latino gangs.

Harbor Gateway was originally known as the Shoestring Strip and was attached to Los Angeles in 1906 to serve as a link to the Pacific Ocean port cities of Wilmington and San Pedro. It was given its present name in 1985.

With a relatively youthful population of 42,000+, it is the home of Gardena High School and seven other schools. The neighborhood is bisected by Artesia Boulevard and has two neighborhood councils, one north of the boulevard and the other south of it. A large transportation center serves the south Los Angeles County area.

Harbor Gateway is a narrow north-south corridor situated approximately between Vermont Avenue and Figueroa Street north of Interstate 405, and Western and Normandie avenues south of I-405. The territory was acquired by the city of Los Angeles in a shoestring annexation, specifically to connect San Pedro, Wilmington, Harbor City and the Port of Los Angeles with the rest of the city.

Despite being part of the city of Los Angeles, some parts of Harbor Gateway have a "Torrance, CA", "Gardena, CA" or "Carson, CA" address because they are serviced by those cities' post offices.

The neighborhood's street boundaries are 120th Street on the north and Vermont Avenue and Figueroa Street on the west and east respectively, running south to 182nd Street, where the neighborhood takes a jog to the west and draws its western boundary at Western Avenue, its eastern line at Normandie Avenue and its southern border at West Sepulveda Boulevard. A southeastern section bounded by 192nd Street on the north, Hamilton Avenue on the east, Del Amo Boulevard on the south and railroad tracks on the west includes the Holiday Inn Harbor Gateway.

Relation of Harbor Gateway to other communities, not necessarily contiguous:

Harbor Gateway is considered highly diverse ethnically, with a diversity index of 0.648 In 2000 Latinos made up 53.4% of the population, blacks were at 16.3%, Asians at 16%, whites at 11.8% and others at 2.4%. Mexico and the Philippines were the most common places of birth for the 40.8% of the residents who were born abroad, considered an average percentage of foreign-born when compared with the city as a whole.

The $47,849 median household income in 2008 dollars was average for the city. Renters occupied 59.7% of the housing units, and homeowners occupied the rest.

In 1992 it was noted that the poorest part of the area was between Rosecrans Avenue and Artesia Boulevard.

The city of Los Angeles annexed the area on December 26, 1906 "in anticipation of taking over, several years later, the independent cities of Wilmington and San Pedro" in order to create the Port of Los Angeles. Because of its slim shape, once likened to two shoelaces tied together with a granny knot, the neighborhood—only a half mile wide at some points—was known for years as the "city strip," the "shoestring strip" or simply "the strip."

The strip was simply open fields before World War II, but "Then came factories, attracting workers who needed housing," and builders "filled those fields with small houses and duplexes." Cubans settled in the 1960s and Mexican immigrants in the 1970s. From 1985 to 1992 some seventy-five single-family homes were replaced by nearly five hundred apartment units, and the neighborhood gained some 1,500 residents, with "no plan, no thought," as the area's leading developer put it.

A Latino gang, the 204th Street Gang, came into existence, but as the African-American population rose from 313 in 1990 to 835 in 2000, a black gang also formed—the 208th Street Crips. "The Crip gang's willingness to go to the police with complaints offended the Latino gang's sense of honor," wrote reporter Sam Quinones for the Los Angeles Times. Yet the gang was never "rooted in the neighborhood," and by 2001 it had faded away.

In 1985, the Los Angeles City Council renamed the area as Harbor Gateway. But a Los Angeles Times reporter noted four years later that

Harbor Gateway lacks much of what makes a community a community—no central business district, no civic center or gathering place, no library branch, no police station . . . no post office. Its largest park is a cemetery. And, despite the new name, mailing addresses of residents remain unchanged. They still say Torrance or Gardena, not Los Angeles.

In 1989, however, Harbor Gateway was tied with the Westwood neighborhood as Los Angeles's second-fastest-growing area, Sylmar being first. But the contrast between the unkempt Los Angeles side of Gardena Boulevard and the tidy Gardena side was striking. In March 1988, the United Way of Los Angeles declared Harbor Gateway an "under-served geographic area," noting "real gaps in law enforcement" and in social services. At the same time, there became a "major drawing card for commercial development" along the 190th Street corridor where "Gleaming high-rises with pleasant landscaping have replaced a Shell oil refinery and manufacturing plants."

In 1985, Harbor Gateway was referred to as a "crime-plagued area," and residents blamed the widespread availability of alcohol for "dozens of robberies, burglaries and other crimes" in the blue-collar neighborhood. There were at that time 51 liquor outlets within a two-mile radius of the intersection of El Segundo Boulevard and Vermont Avenue.

By 1992, the United Way had "funneled $100,000 to the few private charities serving the area, including a small free medical clinic, a job center and an ad hoc coalition helping the homeless." It was written that "extended families crowd into single apartments, and the homeless sleep under freeway overpasses."

In 2013, it was noted that one section of Harbor Gateway had "one of the city's highest concentrations of registered sex offenders," with 86 living in a 13-block area, and so the city began a campaign to force some of them to move by building pocket parks in Harbor Gateway and in Wilmington. In California, such offenders are barred by law from living near schools and parks. The small park was built on city-owned land on the southeast corner of Torrance Boulevard and Denker Avenue.

Other than the notorious 204th street gang, Gardena 13 has also been taking over the Gardena strip of Harbor Gateway. Known for violent acts of crimes, Gardena Police Dept. formed an 18-month investigation which led to the arrest of 11 suspects, one individual being that of a triple murder incident. Harbor Gateway's Gardena Boulevard is heart of this gang. On the corner of Ainsworth and Gardena a mural of the Virgin Mary has expressed the Chicano culture.

In 1991, parts of the Gateway were known to be "the turf of warring black and Latino gangs, and Gardena High School students of those two ethnicities "clashed after a multicultural program in the school auditorium." In December 2006 the Los Angeles Times reported that racial tensions "have held this working-class neighborhood in a state of fear for years" and that the Latino 204th Street Gang, "noted for preying on" blacks had warned all blacks to stay south of 206th Street. The neighborhood averaged "about one Latino-on-black homicide" each year since 1997, the Los Angeles Police Department reported.

In 1997, police, the county Human Relations Commission and neighbors organized to fight the gang and the blight. The city added bulletproof streetlight covers. Residents repaired holes in fences -- escape routes for gang members. Girl Scouts, accompanied by officers, picked up trash and painted over graffiti. More than 100 gang members -- black and Latino -- were sent to jail for parole or probation violations. Police patrols increased. Violence fell. But the campaign dissipated, and gang members slowly returned. By 1999, the Latino-on-black violence resumed.

A 2008, gang injunction put many Latino gang members in jail, and by 2009, racial tensions had "definitely calmed," and a new community center was opened at 1435 Del Amo Boulevard in the city of Torrance and named in honor of Cheryl Green. "Cheryl's death was the tipping point for L.A.," said Los Angeles Councilwoman Janice Hahn, yet gang graffiti still abounded in the neighborhood and blacks were fearful of Latino animosity.

The Rosecrans Recreation Center/CVS Playground is in Harbor Gateway, on Vermont Avenue south of 149th Street. The playground was developed by the nonprofit Boundless Playgrounds. 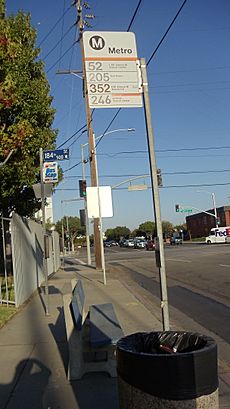 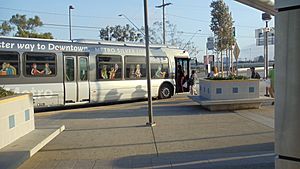 All content from Kiddle encyclopedia articles (including the article images and facts) can be freely used under Attribution-ShareAlike license, unless stated otherwise. Cite this article:
Harbor Gateway, Los Angeles Facts for Kids. Kiddle Encyclopedia.