Featuring a heavy concentration of industry and the third-largest oil field in the United States, it is considered sparsely populated in comparison with the city as a whole and within the city it is distinguished by its youthful population and high percentage of Latino and foreign-born residents.

It is the site of Los Angeles Harbor College, Banning High School and ten other primary and secondary schools. Wilmington has six parks, including one on the waterfront.

Wilmington dates its history back to a 1784 Spanish land grant. It became a separate city in 1863, and it joined the city of Los Angeles in 1909. Places of interest include the U.S. Army headquarters for Southern California and the Arizona territory during the Civil War.

Wilmington shares borders with Carson to the north, Long Beach to the east, San Pedro to the south and west and Harbor City to the northwest.

A total of 53,815 people were living within Wilmington's 9.14 square miles, according to the 2010 U.S. census—averaging 5,887 people per square mile, among the lowest population densities in the city as a whole. The median age was 28. The percentages of people from birth through age 34 were among the county's highest. Population was estimated at 54,512 in 2008.

Wilmington is not considered very diverse ethnically, with a diversity index of 0.245. In 2000, Latinos made up 86.6% of the population, while whites were at 6.4%, Asians at 4.8%, blacks at 2.6% and others at 1.7%. Mexico and Guatemala were the most common places of birth for the 44.5% of the residents who were born abroad, considered a high percentage of foreign-born when compared with the city and the county as a whole.

The $40,627 median household income in 2008 dollars was average for the city. Renters occupied 61.5% of the housing units, with homeowners occupying the rest. In 2000 there were 1,524 military veterans, or 4.6% of the population, relatively low in comparison to the city and county as a whole.

The Port of Los Angeles district of Wilmington was included in the 1784 Spanish land grant of Rancho San Pedro. Phineas Banning acquired the land that would become Wilmington from Manuel Dominguez, heir of the original concession holder Juan Jose Dominguez, in 1858 to build a harbor for the city of Los Angeles. Known as New San Pedro from 1858 to 1863, it was subsequently named Wilmington by “Father of the Harbor” Phineas Banning after his Delaware birthplace.

In 1861, at the beginning of the Civil War, Banning and Benjamin Wilson gave the federal government 60 acres of land to build Drum Barracks to protect the nascent Los Angeles harbor from Confederate attack.

Wilson College, precursor to the University of Southern California, opened in Wilmington in 1874 as the first coeducational college west of the Mississippi.

The City of Los Angeles annexed Wilmington in 1909, and today it and neighboring San Pedro form the waterfront of one of the world’s largest import/export centers. Citizens of Wilmington were dubious that annexation would be in their best interests, fearing that it would shift economic activity out of their city and towards Los Angeles. Because the city government of Los Angeles so strongly wanted to have the growing port inside the city limits, it made a number of promises to Wilmington and also to the equally-dubious citizens of San Pedro. Among these promises were that $10 million would be invested in improvements to the port and that as much would be spent inside the city on public works as was collected in taxes.

In the 1920s, William Wrigley Jr. built innovative housing in Wilmington that was dubbed the “Court of Nations.” 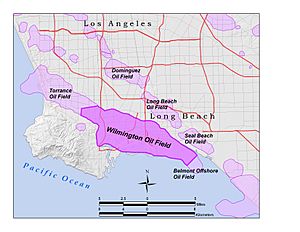 Wilmington is adjacent to the Wilmington Oil Field, discovered in 1932. It is the third largest oil field in the continental United States. Consequently, there are at least 8 major refineries in the Wilmington area, many of them dating back to the original strike.

During World War II the United States Military operated the Los Angeles Port of Embarkation in Wilmington, from which soldiers and sailors were sent abroad to battle zones. The LAPE was controlled by the San Francisco Port of Embarkation from its inception in 1942 until late 1943 when it became autonomous. The California Shipbuilding Corporation, famous for building victory ships during the war (although usually associated with Terminal Island), operated in Wilmington as well. 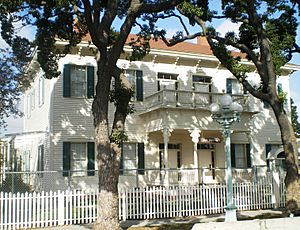 Fountains at the Wilmington Waterfront Park.

All content from Kiddle encyclopedia articles (including the article images and facts) can be freely used under Attribution-ShareAlike license, unless stated otherwise. Cite this article:
Wilmington, Los Angeles Facts for Kids. Kiddle Encyclopedia.