Ichikawa is a city in Chiba Prefecture, Japan. It is on the island of Honshū. It is just to the east of Tokyo. There are a lot of schools and universities there. Ichikawa station is between Koiwa and Motoyawata Stations on the Chūō-Sōbu Line. 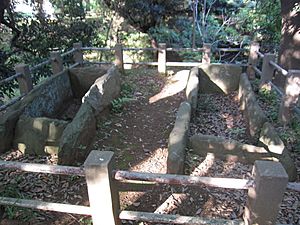 A tomb in Satomi Park

All content from Kiddle encyclopedia articles (including the article images and facts) can be freely used under Attribution-ShareAlike license, unless stated otherwise. Cite this article:
Ichikawa, Chiba Facts for Kids. Kiddle Encyclopedia.