In this Japanese name, the family name is Mishima.

In 1941, Mishima wrote his first notable story. In Hanazakari no Mori (花ざかりの森, "The Forest in Full Bloom"), he described a feeling that his ancestors lived within him.

Mishima graduated from the University of Tokyo in 1947.

Mishima worked in the Japanese Ministry of Finance. At the same time, he was writing.

In 1949, he published his first major novel, Confessions of a mask.

In a summary based on writings by and about Yukio Mishima, OCLC/WorldCat lists roughly 1,700+ works in 4,400+ publications in 40+ languages and 56,600+ library holdings. 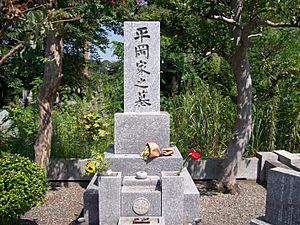 All content from Kiddle encyclopedia articles (including the article images and facts) can be freely used under Attribution-ShareAlike license, unless stated otherwise. Cite this article:
Yukio Mishima Facts for Kids. Kiddle Encyclopedia.