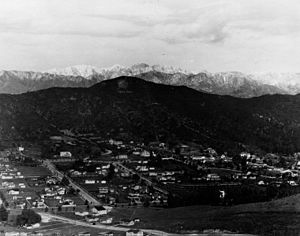 Eagle Rock is named after a large rock outcropping, resembling an eagle with its wings outstretched. The land was part of the Rancho San Rafael under Spanish and Mexican governorship. It was divided into parcels in 1870. It became a city in 1911 and joined Los Angeles in 1923.

Today it is an ethnically diverse, relatively high-income neighborhood known for being the home of Occidental College and for a counterculture element among its 34,000+ people. Eagle Rock maintains a number of historically significant buildings and has a connection with the motion picture industry.

A massive boulder at the district's northern edge contains an indentation which casts a bird-shaped shadow on the rock at certain times of day, giving the neighborhood its name.

Before the arrival of European settlers, the secluded valley below the San Rafael Hills that is roughly congruent to Eagle Rock's present boundaries was inhabited by the Tongva people, whose staple food was the acorns from the valley's many oak trees. These aboriginal inhabitants were displaced by Spanish settlers in the late 18th century, with the area incorporated into the Rancho San Rafael. Following court battles, the area known as Rancho San Rafael was divided into 31 parcels in 1870. Benjamin Dreyfus was awarded what is now called Eagle Rock. In the 1880s Eagle Rock existed as a farming community.

The arrival of American settlers and the growth of Los Angeles resulted in steadily increasing semi-rural development in the region throughout the late 19th century. The construction of Henry Huntington's Los Angeles Railway trolley line up Eagle Rock Blvd. to Colorado Blvd. and on Colorado to Townsend Ave. commenced the rapid suburbanization of the Eagle Rock Valley. Eagle Rock was incorporated as an independent city in 1911. The depletion of the young city's wells, and their incipient contamination due to the lack of a sewer system, led the citizens of Eagle Rock to agree to amalgamation with the city of Los Angeles in 1923.

Several of the major crime sprees that have become part of Los Angeles' late 20th century history have left their mark on the neighborhood.

In 2002, an effort to designate an area of the community as "Philippine Village", for the large Filipino American population, was stopped.

The neighborhood is inhabited by a wide variety of ethnic and socioeconomic groups and the creative class. Over the past decade the Eagle Rock and neighboring Highland Park have been experiencing gentrification as young urban professionals have moved from nearby neighborhoods such as Los Feliz and Silver Lake. A core of counter-culture writers, artists and filmmakers has existed in Eagle Rock since the 1920s.

According to the "Mapping L.A." project of the Los Angeles Times, the 2000 U.S. census counted 32,493 residents in the 4.25-square-mile Eagle Rock neighborhood—or 7,644 people per square mile, an average population densities for both the city and the county. In 2008, the city estimated that the population had increased to 34,466. In 2000 the median age for residents was 35, about average for city and county neighborhoods.

The neighborhood was considered "highly diverse" ethnically within Los Angeles, with a relatively high percentage of Asian people. The breakdown was Latinos, 40.3%; whites, 29.8%; Asians, 23.9%; blacks, 1.8%; and others, 4.1%. The Philippines (35.1%) and Mexico (25.1%) were the most common places of birth for the 38.5% of the residents who were born abroad—an average figure for Los Angeles.

The median yearly household income in 2008 dollars was $67,253, considered high for the city. The neighborhood's income levels, like its ethnic composition, can still be marked by notable diversity, but typically ranges from lower-middle to upper-middle class. Renters occupied 43.9% of the housing stock, and house- or apartment-owners held 56.1%. The average household size of 2.8 people was considered normal for Los Angeles.

Eagle Rock is bordered by the city of Glendale on the north and west, Highland Park on the southeast, Glassell Park on the southwest and the cities of Pasadena and South Pasadena on the east. Major thoroughfares include Eagle Rock Boulevard and Colorado Boulevard, with Figueroa Street along the eastern boundary. The Glendale and Ventura freeways run along the district's western and northern edges, respectively.

Hill Avenue, now Hill Drive, was (and still is) one of Eagle Rock's most beautiful streets. Other streets were Royal Drive (now Mt. Royal Drive), Acacia Street (now Laverna Avenue), Kenilworth Avenue (now Hermosa Avenue), Highland Avenue (now Highland View Avenue), and Fairmont Avenue (now Maywood Avenue). In the 1950s, newer streets such as Kincheloe Drive were extended into the hillsides for the building of larger homes with a view of the city. Today these streets are dotted with large and expensive homes on wide lots.

The neighborhood is home to many historic and architecturally significant homes, many done in the Craftsman, Georgian, Streamline Moderne, Art Deco and Mission Revival styles.

Eagle Rock, once a separate municipality, still has its original City Hall (Historic and Cultural Monument #59, 2035 Colorado Blvd.). Its original library, which was built with the aid of a Carnegie grant in 1914, was replaced in 1927 with a new structure which used one wall and the basement of the old library. This building (2225 Colorado Blvd.) has been listed on the National Register of Historic Places and converted into the Center for the Arts, Eagle Rock, previously the Eagle Rock Community Cultural Center.

All content from Kiddle encyclopedia articles (including the article images and facts) can be freely used under Attribution-ShareAlike license, unless stated otherwise. Cite this article:
Eagle Rock, Los Angeles Facts for Kids. Kiddle Encyclopedia.