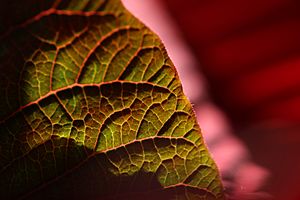 Venation of a poinsettia leaf

The poinsettia (Euphorbia pulcherrima) (also known as Christmas Flower) is a commercially important plant species of the diverse spurge family (Euphorbiaceae). The species is indigenous to Mexico. It is particularly well known for its red and green foliage and is widely used in Christmas floral displays. It derives its common English name from Joel Roberts Poinsett, the first United States Minister to Mexico, who introduced the plant to the US in 1825. 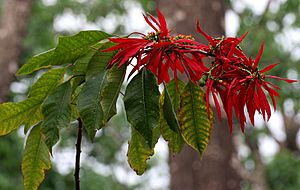 Euphorbia pulcherrima is a shrub or small tree, typically reaching a height of 0.6–4 metres (2–13 ft). The plant bears dark green dentate leaves that measure 7–16 centimetres (2.8–6.3 in) in length. The colored bracts—which are most often flaming red but can be orange, pale green, cream, pink, white, or marbled—are often mistaken for flower petals because of their groupings and colors, but are actually leaves. The colors of the bracts are created through photoperiodism, meaning that they require darkness (12 hours at a time for at least five days in a row) to change color. At the same time, the plants require abundant light during the day for the brightest color.

The flowers of the poinsettia are unassuming and do not attract pollinators. They are grouped within small yellow structures found in the center of each leaf bunch, and are called cyathia.

The poinsettia is native to Mexico. It is found in the wild in deciduous tropical forests at moderate elevations from southern Sinaloa down the entire Pacific coast of Mexico to Chiapas and Guatemala. It is also found in the interior in the hot, seasonally dry forests of Guerrero, Oaxaca, and Chiapas. Reports of E. pulcherrima growing in the wild in Nicaragua and Costa Rica have yet to be confirmed by botanists.

Religious and other traditional associations

Aztec people use the plant to produce red dye and as an antipyretic medication. In Nahuatl, the language of the Aztecs, the plant is called Cuetlaxochitl, meaning "flower that grows in residues or soil" Today it is known in Mexico and Guatemala as Flor de Nochebuena, meaning Christmas Eve Flower. In Spain it is known as Flor de Pascua or Pascua, meaning Easter flower. In Chile and Peru, the plant became known as Crown of the Andes.

The plant's association with Christmas began in 16th-century Mexico, where legend tells of a girl, commonly called Pepita or Maria, who was too poor to provide a gift for the celebration of Jesus' birthday and was inspired by an angel to gather weeds from the roadside and place them in front of the church altar. Crimson blossoms sprouted from the weeds and became poinsettias. From the 17th century, Franciscan friars in Mexico included the plants in their Christmas celebrations. The star-shaped leaf pattern is said to symbolize the Star of Bethlehem, and the red color represents the blood sacrifice through the crucifixion of Jesus.

Poinsettias are popular Christmas decorations in homes, churches, offices, and elsewhere across North America. They are available in large numbers from grocery, drug, and hardware stores. In the United States, December 12 is National Poinsettia Day.

Creation of the American poinsettia industry

Albert Ecke emigrated from Germany to Los Angeles in 1900, opening a dairy and orchard in the Eagle Rock area. He became intrigued by the plant and sold them from street stands. His son, Paul Ecke, developed the grafting technique, but it was the third generation of Eckes, Paul Ecke Jr., who was responsible for advancing the association between the plant and Christmas.

Besides changing the market from mature plants shipped by rail to cuttings sent by air, he sent free plants to television stations for them to display on air from Thanksgiving to Christmas. He also appeared on television programs like The Tonight Show and Bob Hope's Christmas specials to promote the plants.

Until the 1990s, the Ecke family, who had moved their operation to Encinitas, California, in 1923, had a virtual monopoly on poinsettias owing to a technique that made their plants much more attractive. They produced a fuller, more compact plant by grafting two varieties of poinsettia together. A poinsettia left to grow on its own will naturally take an open, somewhat weedy look. The Eckes' technique made it possible to get every seedling to branch, resulting in a bushier plant.

In the late 1980s, university researcher John Dole discovered the method previously known only to the Eckes and published it, allowing competitors to flourish, particularly those using low-cost labor in Latin America. The Ecke family's business, now led by Paul Ecke III, decided to stop producing plants in the U.S., but as of 2008, they still serve about 70 percent of the domestic market and 50 percent of the worldwide market. 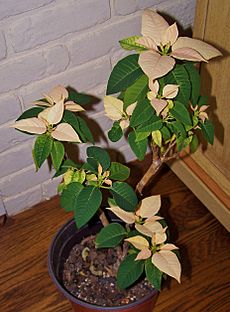 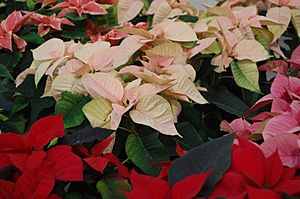 Poinsettia varieties on sale in England 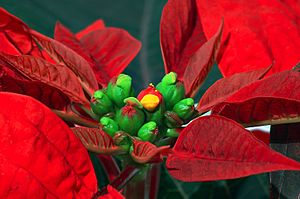 A close-up photo of a poinsettia (Euphorbia pulcherrima)

The poinsettia has been cultivated in Egypt since the 1860s, when it was brought from Mexico during the Egyptian campaign. It is called bent el consul, "the consul's daughter", referring to the U.S. ambassador Joel Poinsett.

There are over 100 cultivated varieties of poinsettia.

In areas outside its natural environment, it is commonly grown as an indoor plant where it prefers good morning sun, then shade in the hotter part of the day. Contrary to popular belief, flowering poinsettias can be kept outside, even during winter, as long as they are kept frost-free. It is widely grown and very popular in subtropical climates such as Australia, Rwanda and Malta. It is commonly grown in mid-hills of Nepal and called Lalupate (लालुपाते), which means "plant with red leaves" in Nepali.

The plant requires a daily period of uninterrupted long, dark nights followed by bright sunny days for around two months in autumn in order to encourage it to develop colored bracts. Any incidental light during these nights (from a nearby television set, from under a door frame, even from passing cars or street lights) hampers bract production. Commercial production of poinsettia has been done by placing them inside a greenhouse and covering the latter completely to imitate the natural biological situation.

To produce extra axillary buds that are necessary for plants containing multiple flowers, a phytoplasma infection—whose symptoms include the proliferation of axillary buds—is used. The discovery of the role phytoplasmas play in the growth of axillary buds is credited to Ing-Ming Lee of the USDA Agricultural Research Service.

All content from Kiddle encyclopedia articles (including the article images and facts) can be freely used under Attribution-ShareAlike license, unless stated otherwise. Cite this article:
Poinsettia Facts for Kids. Kiddle Encyclopedia.