Kids Encyclopedia Facts
For the place formerly with this name near Lake Tahoe, see Stateline, California. 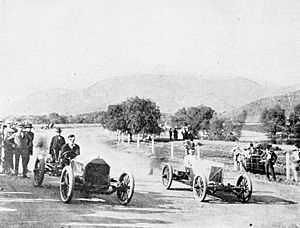 Lakeside was founded in 1886 when 6,600 acres of land surrounding the naturally occurring Lindo Lake were purchased by the El Cajon Valley Land Company, who immediately began to promote the new land as a town and built an 80-room Victorian-style inn, the Lakeside Hotel, at a cost of $50,000 (approximately $1,220,000 today). Three years later, in 1889, Lakeside became connected to the railroad system, and small businesses began to spring up, firmly establishing Lakeside as a bustling community. In 1904, John H. Gay bought the Lakeside Hotel and fenced off the park surrounding Lindo Lake, claiming both as part of his estate. He then proceeded to construct an automobile and horse racetrack around the lake, which became famous when Barney Oldfield set a new land speed record when visiting for the track's opening in 1907. The inn and racetrack became a popular gathering place for millionaires and celebrities and consistently drew large crowds by train to watch the races held there, but both were demolished upon Gay's wishes at his death in 1920.

Lakeside has long held a reputation as a "cowboy town" and "rodeo town," due to the rural setting, the prevalence of ranches and the abundant horse ownership in the area, as well as hosting an 8-acre (32,000 m2) permanent rodeo facility, the Lakeside Rodeo Grounds. The venue is manned and maintained by the El Capitan Stadium Association, an all-volunteer group who aims to assist and support the youth of Lakeside by donating all proceeds from facility rentals to local sports and service, as well as education grants. Notable rodeos include the PRCA-sanctioned Lakeside Rodeo, part of their California circuit and usually occurring on the last weekend in April, regularly drawing over 20,000 observers to the arena, as well as the Lakeside Optimists' Bulls Only Rodeo in July.

During the middle of the 20th century, Lakeside was home to significant Native American, Spanish-speaking and Filipino populations.

Today, protection of the town's history falls to the Lakeside Historical Society, which works primarily to retain and preserve the buildings in the historic former downtown along Maine Avenue, now removed from the central business hub.

While Lakeside was first named for the presence of the small, natural lake it was founded around, it is now home to a trio of large reservoirs in Lake Jennings, El Capitan Reservoir and San Vicente Reservoir. All three are kept stocked by the California Department of Fish and Wildlife with various types of fish ranging from largemouth bass to catfish and rainbow trout, and are popular fishing destinations for local and county residents. The latter two are also open to recreational water activities such as wakeboarding and jetskiing; however, San Vicente is currently closed to the public until at least 2014.

There are a number of parks with outdoor trails for hiking, biking and equestrian riding, most notably the River Park situated along the bank and riverbed of the San Diego River, the park surrounding Lindo Lake and Stelzer and El Monte County Parks. Also located in Lakeside is the trailhead for the climb to the summit of El Cajon Mountain, nicknamed locally as "El Capitan" for its resemblance to the famous Yosemite cliff, which dominates the view of the mountains northeast of Lakeside.

As well as hosting outdoor recreational opportunities, the town is also in close proximity to a number of Native American casino operations, the most notable of which is Barona Resort & Casino a few miles to the north. A full resort featuring hotel, buffet and golfing facilities, Barona is notable for having a gambling age restriction lower than most California casinos at 18 years old,. Other Native American casinos nearby include Viejas Casino, located to the east of Lakeside on Interstate 8, as well as the Golden Acorn casino further out along the interstate.

Lakeside is in the western foothills of the Cuyamaca Mountains.

According to the Köppen Climate Classification system, Lakeside has a warm-summer Mediterranean climate, abbreviated "Csa" on climate maps.

There were 6,849 households out of which 39.4% had children under the age of 18 living with them, 57.9% were married couples living together, 12.4% had a female householder with no husband present, and 24.8% were non-families. 18.7% of all households were made up of individuals and 7.3% had someone living alone who was 65 years of age or older. The average household size was 2.83 and the average family size was 3.22.

All content from Kiddle encyclopedia articles (including the article images and facts) can be freely used under Attribution-ShareAlike license, unless stated otherwise. Cite this article:
Lakeside, California Facts for Kids. Kiddle Encyclopedia.