Victorville is a city in Victor Valley in San Bernardino County, California. Its population as of the 2020 census was 134,810.

In 1858, Aaron G. Lane came to what is now known as Victorville and founded a way station called "Lane's Crossing." For many years it provided shelter and supplies for people making the journey across the desert from the east to San Bernardino. Lane's Crossing was on the Mojave River on today's Turner Road, two miles north from where Interstate 15 crosses the river. Captain Lane was a veteran of the Mexican-American War who had suffered from malaria during that war. Originally he migrated west to join the California gold rush, but he learned that he could make a better living selling supplies to the miners.

He settled in Ione near Sutter's Mill in northern California during those years, but he migrated to San Bernardino in 1857. He settled on the Mojave River in 1858, where he established his way station. He later sold out to Texan John Fry Miller, who changed the name of Lane's Crossing to Pioneer Station. Miller was a rancher and became involved in Mojave Valley politics, setting up the first polling place in the area at his home. That first year, ten citizens cast their votes at Lane's residence, rather than making the long trip to San Bernardino.

Census records show that ten people lived in two residences on the river by 1860. Listed in Dwelling No. 703 were Aaron Lane, William R. Levick, and the Nicholson family, consisting of George and Frances, and their three children aged 9 to 13. Joseph and Mary Highmoor lived in Dwelling No. 704, with a seven-year-old female named Anna.

The Levick, Nicholson and Highmoor families were Mormon pioneers. Highmoor established a way station called Highmoor's Crossing, which was near today's Oro Grande bridge of the National Trails Highway (known as U.S. Route 66), over the Mojave River at what is called the Lower Narrows. The Nicholson family moved downriver a few miles and established a way station at "Point of Rocks" in today's Helendale area.

In 1867, Lafayette Meacham, a Mormon who ran a way station near today's Barstow area, made a new wagon road from his stage stop to what is now Old Town Victorville. It crossed the Mojave River at today's Sixth Street. This new road, now called Stoddard Wells Road, was a short-cut across the desert and became a popular route for muleskinners and freighters. The river crossing was called Mormon Crossing and the surrounding area became known by that name.

In the 1870s, Heber "Pete" Huntington established a stage stop, Huntington Station, at Mormon Crossing. Also a Mormon pioneer, Huntington was leader Brigham Young's nephew. Huntington later bought out the Stoddard brothers, who had a way station half way to today's Barstow from Victorville, and also bought out the Meachams, who ran the stage stop named Fish Ponds or Mormon Grocery.

In 1885, the newly established telegraph station at the railroad siding of "Victor", named for the California Southern Railroad's General Manager Jacob Nash Victor, was the beginning of what developed as today's Old Town Victorville. The village which sprang up around that railroad facility became known by the same name of Victor.

In 1901, at the suggestion of local postmistress Abbey Turner, the U.S. Post Office Department changed that name to Victorville to stop the postal confusion with the town of Victor, Colorado.

In 1926, U.S. Route 66 was begun, being marked in many areas on existing roads. In Victorville, US 66 is marked on D and Seventh streets, with a section of Interstate 15 going towards the Cajon Pass. It is the primary street through Old Town Victorville.

In 1940, Herman J. Mankiewicz and John Houseman wrote the first two drafts of the screenplay for the film Citizen Kane in Victorville. They worked in seclusion for 12 weeks while residing at the North Verde Ranch, now called the Kemper Campbell Ranch.

Its land was turned over to other uses. Part of it is now the Southern California Logistics Airport. The former Air Force base housing area is now vacant. It forms a ghost town that is used for military training by troops from the U.S. Army's Fort Irwin Military Reservation. The Victorville Federal Penitentiary has been built on another part of the former air base.

The city of Victorville was officially incorporated by the State of California on September 21, 1962.

On August 14, 1977 actor Ron Haydock was struck and killed while hitchhiking near Victorville.

In 2003, the Roy Rogers and Dale Evans Museum was moved from Victorville to Branson, Missouri. It closed before 2015.

Victorville is located at the southwestern edge of the Mojave Desert, 81 miles (130 km) northeast of Los Angeles, 34 miles (55 km) south of Barstow, 48 miles (77 km) east of Palmdale, and 37 miles (60 km) north of San Bernardino through the Cajon Pass on Interstate 15. Victorville is the location of offices of the "Mojave Desert Branch" of the San Bernardino County government.

Victorville is bordered by Apple Valley on the east, Hesperia on the south, and Adelanto on the west. The Mojave River flows sporadically through Victorville. The elevation at City Hall is approximately 2,950 feet (900 m) above sea level.

The city is located in the High Desert, an area known for its unique and moderate weather patterns. The National Weather Service has maintained a weather station in Victorville since 1917. Official records show that Victorville has a cold desert climate (BWk) with four distinct seasons.

Winter: Victorville's inland desert position and higher elevation prevents the city from experiencing the more mild winter temperatures seen in the Los Angeles Basin and other areas south of the San Gabriel Mountains and San Bernardino Mountains. Winter days are mild to cool with some chilly days, but unlike many lowland regions of Southern California, nights can be very cold, with low temperatures normally dropping to freezing or below. Winter nights are harsh to sensitive plants. Low temperatures below 25 °F (−4 °C) are not uncommon during the winter, with teens (10 - 19°F) being possible during colder periods. Such frigid conditions are rare, but night temperatures have reached as low as the single digits and has once even dropped below zero (−1 °F (−18 °C) on January 17, 1949). This is the season when rainfall is most common, coming in the form of showers or steady rain from Pacific systems originating in the north. They are usually the same systems that bring heavier rainfall south and west of the mountains, but most heavy rainfall has trouble breaking the rain shadow of the mountains. Major storms have broken through the shadow, however, with heavy downpours occasionally making it to Victorville and the desert beyond. Despite the often freezing nighttime temperatures, significant snowfall is rare. The area sometimes gets light flurries that often mix with rain and melt away rapidly, but any snowfall is extremely meager compared to what the mountains to the south receive every winter season. Average January temperatures range from a maximum of 59.5 °F (15.3 °C) to a minimum of 31.4 °F (−0.3 °C). The record low temperature was −1 °F (−18 °C), as mentioned above.

Summer: The summer climate for this area in the Mojave Desert is hotter than the Los Angeles basin, but 10 or 15 degrees cooler than in the Colorado Desert. The higher elevation prevents the scorching hot (110 °F (43 °C)+) high temperatures seen in many areas of the Colorado Desert (such as in Palm Springs or Needles), but days are still very hot nonetheless. The mountain ranges to the south block off all traces of June Gloom clouds or moderating Pacific breezes seen in the Los Angeles basin, and to a lesser extent, the Riverside-San Bernardino area from reaching Victorville. The dry air and lack of moisture also enables the air to rapidly warm up, and as a result of all these factors, summer high temperatures usually top out at least in the high 90s °F with 100 °F (38 °C) being easy to reach. Heat waves can occasionally bring the temperature to 110 °F (43 °C), but temperatures above that are uncommon. Air conditioning use spikes during this period. Despite the hot summer daytime temperatures, nighttime temperatures provide substantial relief with lows usually reaching the low 60s °F or even the 50s °F due to lack of moisture in the desert air. The North American Monsoon can bring westward straying summer thunderstorms to the area (particularly in the later part of the season), causing local flash floods, microburst, hail and providing some relief from the very hot days. Average July temperatures range from a maximum of 99.1 °F (37.3 °C) to a minimum of 60.8 °F (16.0 °C). The record high temperature was 116 °F (47 °C) on July 10, 2002.

A controversial revitalization project started in 1995 in the ten square blocks along Historic Route 66. After years of setbacks in developing Old Town, the city—along with input from residents and local business owners—created an Old Town Strategic Action Plan in 2007. In 2008, demolition on hazardous and dilapidated buildings began. In 2010, as the economy declined, the statewide end of Economic Redevelopment Agencies which funded the project placed further work on indefinite hold. As of 2012, the area still has problems with crime, homelessness, and many buildings remain boarded up. In 2016 a group R.O.O.T 66 (Revive Our Old Town) meets to help make Old Town Victorville great again.

Notable changes made in Old Town Victorville are the Veteran's Memorial on the corner of Seventh Street and Forrest Ave, the Route 66 Museum on D Street, the Transportation Center on D Street, and the Old Victor School on Sixth Street. 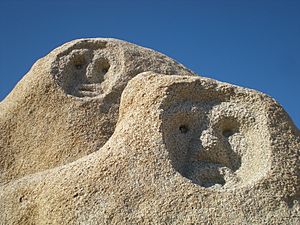 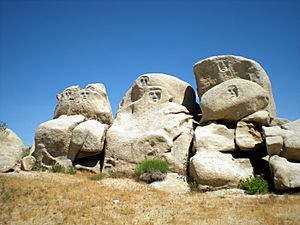 There are several notable areas and locations within Victorville such as Spring Valley Lake, the Old Sheriff's Office, U.S. Route 66 and the Southern California Logistics Airport.

Intercity rail service is provided at the Victor Valley Transportation Center – the Amtrak Southwest Chief stops in each direction daily. The Transportation Center also hosts Greyhound Lines intercity bus services. Brightline West is a long planned a high-speed rail line at the Victor Valley station in the adjacent town of Apple Valley with direct service from Palmdale or Rancho Cucamonga to Las Vegas.

FlixBus utilizes a stop at 14618 7th Street, with buses to several destinations, including Las Vegas, Santa Clarita, and Los Angeles.

The city is home to the Southern California Logistics Airport.

All content from Kiddle encyclopedia articles (including the article images and facts) can be freely used under Attribution-ShareAlike license, unless stated otherwise. Cite this article:
Victorville, California Facts for Kids. Kiddle Encyclopedia.