The Victor Valley is a valley in the Mojave Desert and subregion of the Inland Empire, in San Bernardino County in Southern California. 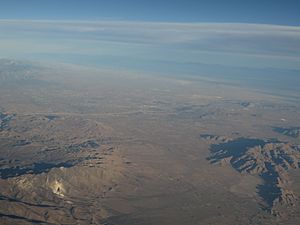 The Victor Valley Transportation Center is an intermodal transit center in Victorville, that is served by Amtrak, Greyhound, the Victor Valley Transit Authority and military shuttles to Fort Irwin. The center also serves as a Park and Ride facility for carpooling commuters.

The planned Brightline West high-speed rail line to Las Vegas will terminate at the Victor Valley station until it is extended to Los Angeles or Palmdale.

Public transportation, provided by the Victor Valley Transit Authority (VVTA), serves most of cities and communities of the Victor Valley area. VVTA offers subsidized tickets for Greyhound Line busses to Barstow and San Bernardino. The Barstow Area Transit serves Barstow and its surrounding communities to the north. The two transit systems connect via the B-V Link service. Amtrak also serves the Valley at Victorville station.

All content from Kiddle encyclopedia articles (including the article images and facts) can be freely used under Attribution-ShareAlike license, unless stated otherwise. Cite this article:
Victor Valley Facts for Kids. Kiddle Encyclopedia.