The San Bernardino National Forest is a United States National Forest in Southern California encompassing 823,816 acres (3,333.87 km2) of which 677,982 acres (2,743.70 km2) are federal. The forest is made up of two main divisions, the eastern portion of the San Gabriel Mountains and the San Bernardino Mountains on the easternmost of the Transverse Ranges, and the San Jacinto and Santa Rosa Mountains on the northernmost of the Peninsular Ranges. Elevations range from 2,000 to 11,499 feet (600 to 3505 m). The forest includes seven wilderness areas: San Gorgonio, Cucamonga, San Jacinto, South Fork, Santa Rosa, Cahuilla Mountain and Bighorn Mountain. Forest headquarters are located in the city of San Bernardino. There are district offices in Lytle Creek, Idyllwild, and Fawnskin.

This site was the filming location for Daniel Boone in 1936; part of the 1969 musical film Paint Your Wagon was shot here.

Free camping is available at 47 different 'Yellow Post' campsites located throughout the forest.

According to United States Geological Survey maps of the forest, it consists of two large areas or tracts: a northern and southern portion.

The west border of the forest adjoins Angeles National Forest and runs north-south about ten miles west of Interstate 15. At its widest parts, the northern portion of the forest runs about 57 miles (90 km) on an east–west dimension. It runs about 24 miles (40 km) on a north–south dimension. This portion of the forest encompasses the San Bernardino Mountains. The area extends west of Mount San Antonio and Wrightwood in San Bernardino County. The eastern portion of the forest extends about ten miles east of Big Bear City and includes the San Gorgonio Wilderness. The southernmost portion is bisected by the Riverside County line and borders the Morongo Indian Reservation north of Cabazon.

At its widest point, the southern portion is about 27 miles (40 km) on a north-south dimension and about 30 miles (50 km) on an east-west dimension. Toro Peak and the Santa Rosa Indian Reservation are near the south extent. At the north is Snow Creek Village and the Morongo Indian Reservation. Mount San Jacinto State Wilderness is carved out of the southern portion. The community of Idyllwild is surrounded by national forest lands.

While most National Forests include lumber resources, these two areas also include:

The two tallest waterfalls in Southern California, Big Falls and Bonita Falls, are located in the San Bernardino National Forest.

There are seven official wilderness areas lying within San Bernardino National Forest that are part of the National Wilderness Preservation System. One extends into neighboring Angeles National Forest and three into land that is managed by the Bureau of Land Management (as indicated).

Photo of Engine 57 before it was destroyed.

The five-member crew (Mark Loutzenhiser, Jess McLean, Jason McKay, Daniel Hoover-Najera and Pablo Cerda) of the San Bernardino National Forest Alandale Fire Station's Engine 57 was fatally burned by a sudden, intense fire run up a steep drainage below their location during the Esperanza Fire at approximately 7:15 a.m. on October 26, 2006. All five firefighters were overrun by the fire at Twin Pines, located in the San Jacinto Mountains approximately four miles southwest of the City of Cabazon, California. The fire was located near Beaumont, California in Riverside County. Alandale station is located near the community of Idyllwild. 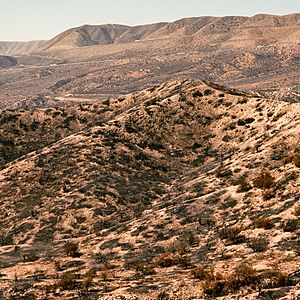 All content from Kiddle encyclopedia articles (including the article images and facts) can be freely used under Attribution-ShareAlike license, unless stated otherwise. Cite this article:
San Bernardino National Forest Facts for Kids. Kiddle Encyclopedia.