The Morongo Band of Mission Indians is a federally recognized tribe. The main tribal groups are Cahuilla and Serrano. Tribal members also include Cupeño, Luiseño, and Chemehuevi Indians. Although many tribes in California are known as Mission Indians, some, like those at Morongo, were never a part of the Spanish Missions in California. The Morongo Reservation is located in Riverside County, California.

The name Morongo comes from the Serrano clan Maarrenga'. The first official "Captain" of Potrero Ajenio (aka San Gorgonio Agency) recognized by the Bureau of Indian Affairs was the hereditary leader of the Maarrenga', known to Americans by his English name, John Morongo. As time went on the Bureau referred to the tribe as the Morongo Band of Mission Indians.

Cahuilla and Serrano are Takic languages, part of the Uto-Aztecan language family. The main aboriginal group of the San Gorgonio Pass are Pass Cahuilla, who call the area Maalki. The Serrano, who had traditionally intermarried with the Pass Cahuilla, and who have lived in the area since well before the inception of the reservation, call the area Maarrkinga'. Cahuilla and Serrano are technically considered to be extinct as they are no longer spoken at home, and children are no longer learning them as primary languages. Joe Saubel, a Morongo tribal member and the last pure speaker of Pass Cahuilla, died in 2008. The last pure speaker of Serrano was also enrolled at Morongo, Ms. Dorothy Ramon, who died in 2002. Recent generations have found a renewed interest in their native languages however, and many families are now reclaiming Pass Cahuilla and Serrano for their children. 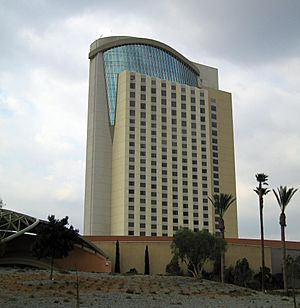 The tribe opened a small bingo hall in 1983, which became the foundation of what is now one of the oldest Native gaming enterprises in California. The government of Riverside County, California, attempted to shut down the bingo hall, so the tribe joined with the Cabazon Band of Mission Indians in a lawsuit eventually decided by the U.S. Supreme Court. On February 25, 1987, the court upheld the right of sovereign Indian tribes to operate gaming enterprises on their reservations.

The Morongo Casino, Resort & Spa was opened in 2004 in Cabazon, California. It is open seven days a week, 24 hours a day. The hotel has 310 rooms. Several restaurants and bars are part of the complex, Desert Orchid: Contemporary Asian Cuisine, Potrero Canyon Buffet, Cielo: Pacific Coast Steak and Seafood Restaurant, Serrano, Sunset Bar and Grill, a food court, Mystique Lounge, and the Pit Bar. The club, 360, is open on weekends.

A bottling plant on the reservation is operated by Nestle Waters North America Inc., which leases the property from the tribe. The plant bottles Arrowhead spring water as well as purified water sold under the brand Nestle Pure Life. In his 2010 book "Bottled and Sold: The Story Behind Our Obsession with Bottled Water”, author Peter H. Gleick said the plant was producing more than 1 billion bottles of Arrowhead spring water per year.

The Malki Museum on the Morongo Reservation is open to the public. It maintains the Malki Museum Press, which publishes the Journal of California and Great Basin Anthropology and scholarly books on Indian culture. The reservation is also home to the Limu Project, a tribal community-based nonprofit organization that helps families preserve knowledge of their indigenous languages, history, and cultural traditions.

All content from Kiddle encyclopedia articles (including the article images and facts) can be freely used under Attribution-ShareAlike license, unless stated otherwise. Cite this article:
Morongo Band of Mission Indians Facts for Kids. Kiddle Encyclopedia.