Uto-Aztecan or Uto-Aztekan is a family of indigenous languages of the Americas, consisting of over 30 languages. Uto-Aztecan languages are found almost entirely in the Western United States and Mexico. The name of the language family was created to show that it includes both the Ute language of Utah and the Nahuan languages (also known as Aztecan) of Mexico.

The homeland of the Uto-Aztecan languages is generally considered to have been in the Southwestern United States or possibly Northwestern Mexico. 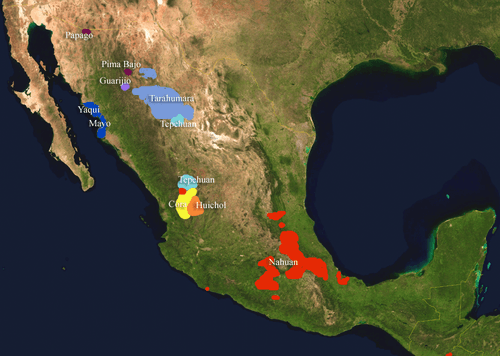 Uto-Aztecan-speaking communities in and around Mexico

All content from Kiddle encyclopedia articles (including the article images and facts) can be freely used under Attribution-ShareAlike license, unless stated otherwise. Cite this article:
Uto-Aztecan languages Facts for Kids. Kiddle Encyclopedia.