Salmon is a city in Lemhi County, Idaho. The population was 3,112 at the 2010 census. The city is the county seat of Lemhi County.

Located in the Lemhi River valley, Salmon is home to the Sacajawea Interpretive, Cultural and Education Center, which focuses on Lemhi Shoshone culture, as well as the interaction between Sacagawea and other Shoshone and Lewis and Clark. 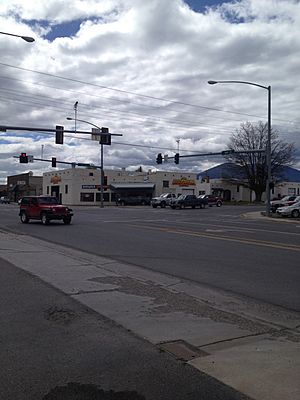 The Lewis and Clark Expedition crossed the continental divide at Lemhi Pass, 30 miles (48 km) to the southeast of Salmon. They followed the Salmon River through the present site of the city, then ascended the North Fork of the river, at the present day town named after the confluence, to cross into present-day Montana near Lost Trail Pass. The sole female in the party, Sacagawea, was born in the Lemhi Valley near Salmon. The Sacajawea Interpretive, Cultural and Educational Center was opened in Salmon in August 2003.

From 1910 to 1939, Salmon was the western terminus of the now-defunct Gilmore and Pittsburgh Railroad.

The Salmon River passes through Salmon; white water rafters and other people interested in outdoor recreation have brought additional economic activity to Salmon. The Lemhi River flows into the Salmon River at Salmon.

Education in Salmon is provided by Salmon School District #291. and the Upper Carmen Public Charter School.

All content from Kiddle encyclopedia articles (including the article images and facts) can be freely used under Attribution-ShareAlike license, unless stated otherwise. Cite this article:
Salmon, Idaho Facts for Kids. Kiddle Encyclopedia.