Spanish missionaries in the area during the early 17th century named the peak after Saint Gorgonius.

Since it is the highest point in a region which is separated from higher peaks (e.g. in the Sierra Nevada) by relatively low terrain, San Gorgonio Mountain is one of the most topographically prominent peaks in the United States. It is ranked 7th among peaks in the 48 contiguous states and 18th overall.

Like other high peaks in the Transverse Ranges, the mountain has a pyramid shape, with a steep north face and a slightly shallower south face. The mountain is large and broad; the summit plateau itself is one square-mile in area (2 km2).

In contrast to its spectacular but lower neighbor, San Jacinto Peak, San Gorgonio is not particularly craggy, and from a distance, it appears to be an extremely high hill, earning it the name of greyback. Despite not being particularly striking in appearance during the summer, it is the only mountain in Southern California with a summit a significant distance above the tree line. As such its bright white winter snow cap, unobstructed by vegetation, makes the mountain noticeable from many miles away. The mountain hosts the longest recorded line of sight in the contiguous United States; it is plainly visible from the summit of Mount Whitney, 190 miles (306 km) away. 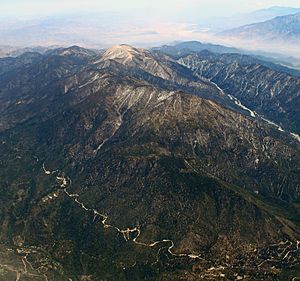 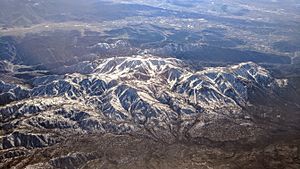 Mount San Gorgonio with snow, with the Banning Pass and Banning, California, in the background

San Gorgonio Mountain lies at the easternmost extremity of the Transverse Ranges. The mountain is a heavily eroded, partially dissected plateau.

Big Bear Lake, California is the largest city near San Gorgonio, and hosts two major ski resorts, as well as a popular summer get away for many southern Californians that utilize the lake for boating swimming, and fishing.

The mountain is a massive block of quartz monzonite, which sits on an ancient platform of Precambrian gneissic rocks. Glacial and fluvial deposits dominate the surface of the lowest part of the mountain.

Jenks Lake, on the north slope of the mountain, is one of the few perennial lakes in Southern California.

The climate on most of the mountain is Csb (Warm-summer Mediterranean) under the Köppen climate classification. The summit of San Gorgonio has an Alpine climate (ET), as no month in that area has an average temperature greater than 10 °C (50 °F).

Like most other peaks in the Transverse Ranges, the summit is a technically easy class 1 hike. Several trails lead to the broad summit of San Gorgonio Mountain, which rises a few hundred feet (100 m) above the tree line. Most routes are very strenuous and require well over 4,000 feet (1,200 m) of elevation gain.

The trail leading from the Fish Creek Trailhead to San Gorgonio Mountain has about 3,400 feet (1,000 m) of gain, less than the routes from the South Fork and Vivian Creek trailheads. Hikers should always take caution because some junctions on this trail are not well marked.

On December 1, 1952, a Douglas C-47, serial number 45-1124, crashed at the 11,000 feet (3,400 m) level on the eastern face of the mountain. The C-47 was en route from Offutt Air Force Base, Nebraska to March Air Force Base near Riverside, California when it struck the mountain at night in the middle of a storm. "The aircraft was last heard from at 9:51 p.m. Pacific Standard Time, Monday." Thirteen people died.

Nearly one month after the C-47 accident a Marine Corps HRS-2 helicopter, bureau number 129037, crashed on the mountain in coordination of the efforts of recovering the victims. The three crewmen of the helicopter survived the impact. Most of the wreckage of the two aircraft remain on the mountain and are accessible via the Fish Creek Trailhead or the South Fork Trailhead.

In more recent years, the mountain claimed the lives of Frank Sinatra's mother, Dolly (January 16, 1977) and Dean Paul Martin (March 21, 1987), son of Dean Martin, in unrelated plane crashes. Martin was an Air National Guard pilot and the McDonnell Douglas F-4C he was flying disappeared in a snowstorm and the wreckage was found on the mountain several days later.

All content from Kiddle encyclopedia articles (including the article images and facts) can be freely used under Attribution-ShareAlike license, unless stated otherwise. Cite this article:
San Gorgonio Mountain Facts for Kids. Kiddle Encyclopedia.