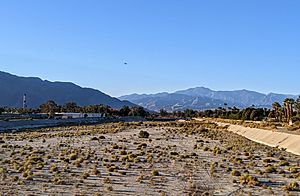 The Whitewater River in the dry fall of 2020, looking upstream from Date Palm Drive in Cathedral City toward Banning Pass and the Palm Springs International Airport with a plane on final approach

The Whitewater River is a small permanent stream in western Riverside County, California, with some upstream tributaries in southwestern San Bernardino County. The river's headwaters are in the San Bernardino Mountains and it terminates at the Salton Sea in the Colorado Desert. The area drained by the Whitewater River is part of the larger endorheic Salton Sea drainage basin.

Initially called Agua Blanco by early Spanish explorers, and later translated into English as white water, the river received its name for its milky appearance created by the silicate and lime sediments it carries. The community of Whitewater was named after the river, and became a key stop on the Bradshaw Trail stagecoach runs.

The Whitewater River has three significant tributaries: the North, Middle and South Forks, all within the Sand to Snow National Monument.

The North Fork begins in the subalpine zone at about 10,000 m (33,000 ft) on San Gorgonio Mountain and descends steeply southeast to the Middle Fork, which flows east through a wide arroyo. The South Fork flows northeast through a narrower wooded canyon, joining the Middle Fork lower down. The upper watershed is in the San Gorgonio Wilderness and San Bernardino National Forest, then it reaches land managed by the Bureau of Land Management. Below the confluences the arroyo is at least 0.5 mi (0.80 km) wide, paved with accumulations of boulders, gravel, and sand brought down by floods and brushy except in stream channels cleared by floodwaters. Due to floods and shifting channels, there is almost no riparian forest development, except very locally along unnamed minor tributaries with relatively stable channels.

The Pacific Crest Trail (PCT) enters the arroyo from the north and follows it downstream to a trailhead at the Whitewater Preserve, owned by The Wildlands Conservancy. A few fish have escaped upstream, establishing a small population of wild but non-native Rainbow Trout. These fish are confined to places where there is shade or tributaries with cooler water. Apparently, they are not sufficiently adapted to elevated summer temperatures to colonize the rest of the stream.

Below the PCT trailhead the enclosing hills fall away so the arroyo exits from the San Bernardino Mountains near Morongo Valley into the western Coachella Valley. The San Gorgonio River which rises further west on the south side of San Gorgonio Mountain then joins it. Garnet Wash, Mission Creek, Chino Canyon Wash, Palm Canyon Wash, Cathedral Canyon and Thousand Palm Canyon Wash also join, but the water mainly penetrates through the porous desert floor, providing groundwater recharging of the Coachella Valley aquifer.

Before approaching Palm Springs, the Whitewater River is fed imported water from the Colorado River Aqueduct, managed by the Metropolitan Water District of Southern California. During rare floods, surface water may reach the endorheic basin of the Salton Sea, below sea level.

Panoramic view of the dry Whitewater River in the Coachella Valley, between Palm Springs and the Salton Sea, with date palm orchards visible on the far side

In 2010 Huell Howser Productions, in association with KCET/Los Angeles, featured the river and nearby community in California's Gold.

All content from Kiddle encyclopedia articles (including the article images and facts) can be freely used under Attribution-ShareAlike license, unless stated otherwise. Cite this article:
Whitewater River (California) Facts for Kids. Kiddle Encyclopedia.